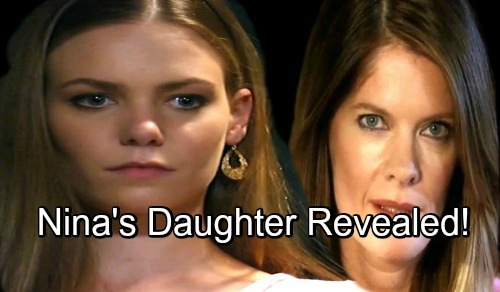 General Hospital (GH) spoilers tease that Nina (Michelle Stafford) could be jumping in another major storyline. In fact, a couple of GH stories may be poised to cross over. During Nina’s evening with Charlotte (Scarlett Fernandez), she decided to make her way over to the bar and order some dessert. That’s when she caught a bit of Julian (William deVry) and Brad’s (Parry Shen) risky conversation.

Brad really shouldn’t be whisper-shouting about the baby drama in public, but the damage is done. Nina looked intrigued as Brad pushed Julian to intervene. He insisted that Julian should fix this before he loses his son.

Nina stopped eavesdropping before she learned anything more, but she’s got a crucial puzzle piece now. She knows there’s some issue that could cost Brad and Lucas (Ryan Carnes) the baby. Nina will undoubtedly file that info away until it’s needed. That could be sooner than anyone expects!

Now let’s talk about the search for Nina’s long-lost daughter. Valentin (James Patrick Stuart) believes Curtis (Donnell Turner) is on the right track with Sasha (Sofia Wattsson). However, this revelation might matter more to fans if it’s someone we already know.

General Hospital recently dropped some huge clues about Kiki (Hayley Erin). They practically shoved her in our faces as a possibility, but that might’ve been misleading. Perhaps GH wants everyone to think Sasha’s wrong, Kiki’s right and that’s that. Will this mystery truly be that easy? Some soapy twists might be thrown in to make this interesting.

What’s the purpose of including Nina in the “Wiley” chaos? She’s busy with her own hot plot, so why bring her into another mess? Maybe it’ll tie in with her long-lost daughter search. They may want Nina in Brad’s orbit so she can uncover Nelle’s (Chloe Lanier) scheme…and realize Nelle’s her kid!

Nelle’s in the right age range and her past is murky since she’s known for lying. Nelle’s father was a liar as well, so her history could easily be rewritten to fit this story. Other than the kidney transplant confirmation, we can’t trust much we’ve heard from Nelle.

Will Nina’s eavesdropping put her on the path to several shockers? GH could be laying the groundwork for a surprise daughter contender. General Hospital spoilers say some great conflict could come out of this. Can you imagine how Nina will feel if Nelle the rotten schemer is her own flesh and blood?

Whether Nelle belongs to Nina or not, it’d be fun for GH to explore the option. We’ll give you updates as other news comes in. Stay tuned to the ABC soap and don’t forget to check CDL often for the latest General Hospital spoilers, updates and news.