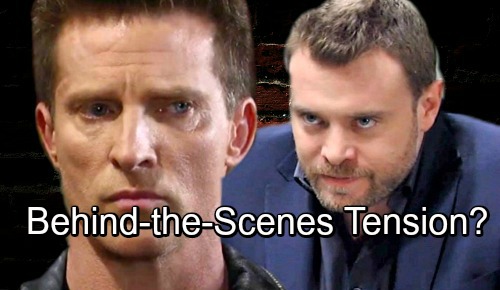 General Hospital (GH) spoilers tease that a new blind item points to serious tension on set. Of course, we should note that this info could apply to any of the four main soaps. Since blind items usually involve things we aren’t supposed to know, there’s always a mystery element in play.

Nevertheless, this particular blind item certainly seems to fit GH. According to Soap Opera Digest, major issues remain for a couple of popular actors. A blurb reveals that “the divide between this soap’s top two leading men is growing wider by the minute.” Let’s unpack that and see why it probably revolves around General Hospital.

For starters, we should consider the other soaps. Days of Our Lives has been spreading the love lately when it comes to screen time for their cast members. It’s tough to even nail down who their two leading men would be. Besides, there doesn’t seem to be all that much tension behind the scenes at DOOL.

There’s been buzz in the past about some issues at The Bold and the Beautiful, but not about the show’s leading men. That was more about the vets’ air time concerns when Ingo Rademacher was added as Thorne. It doesn’t seem likely that this blind item relates to B&B at all.

The Young and the Restless may not be a good fit either. The actors who might be considered leading men appear to get along well enough. There’s plenty of drama among the cast right now, but it’s mostly about how the show’s being run. Lack of raises, cut vets and poor writing are the primary concerns.

That leaves General Hospital, which is perhaps the soap most notorious for behind the scenes drama. We should also point out that there’s been buzz all along about Steve Burton (Jason) and Billy Miller (Drew). From the moment Burton returned, gossip erupted about friction with Miller. It makes sense considering Miller was stripped of the Jason title and lost Sam (Kelly Monaco) as a love interest.

If you ask most GH fans, they’d call Burton and Miller the show’s top two leading men. That part lines up as well. This blind item indicates that the conflict is worsening, so could that spell trouble for the future? Will Miller get fed up eventually and bail? It’s a possibility if this speculation is true and the tension persists.