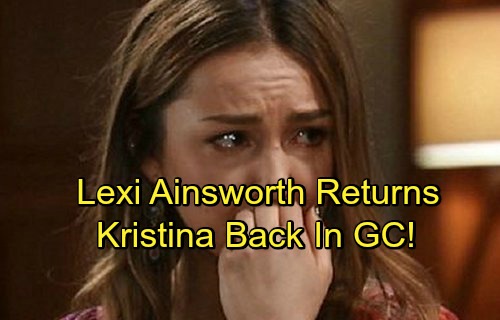 General Hospital (GH) spoilers tease that a familiar face is returning to Port Charles. Several major departures have rocked the soap world lately, so news about a comeback is welcome. According to Soap Opera Digest, Lexi Ainsworth is headed back to PC as Kristina. GH viewers can expect to see her later this summer, which gives us something to look forward to.

Of course, there’s no mention of Parker (Ashley Jones) so far. That could mean Parker and Kristina are headed for a bitter split. General Hospital fans will recall that Kristina renewed her romance with Parker last year. They were ushered off canvas together after Parker was fired from her teaching position.

Kristina’s been living with Parker in Oregon, so she’ll need a good reason to return home. It sounds like she’ll be alone, which gives us two options. There’s no word on how long Kristina will be in town, so it’s possible this will just be a Parker-less visit. Since it seems Michael (Chad Duell) will be seriously injured in a car accident, that could bring Kristina home to support her family.

However, we should also consider the possibility that things didn’t work out. Kristina and Parker may have decided that they’re just not on the same page. They’re not in the same age range, so they undoubtedly have different wants and needs. Living together may have opened their eyes to that.

If that’s the case, perhaps Kristina will be sticking around for a while. It’d be nice to see Kristina get a new storyline and spend some time with her loved ones. Kristina can be a real firecracker, so it’s always fun to have her around. She’s got a feisty spirit and always goes after what she wants.

Alexis (Nancy Lee Grahn) would be glad to see her daughter call it quits with Parker and settle down in PC again. Regardless, many GH watchers will anxiously await Kristina’s arrival. General Hospital spoilers say some hot drama’s ahead, so Kristina should have a chance to get in on the action.

Are you glad Lexi Ainsworth is coming back to GH? What kind of story would you like to see for Kristina? We’ll give you updates as other details emerge. Stay tuned to the ABC soap and don’t forget to check CDL often for the latest General Hospital spoilers, updates and news.