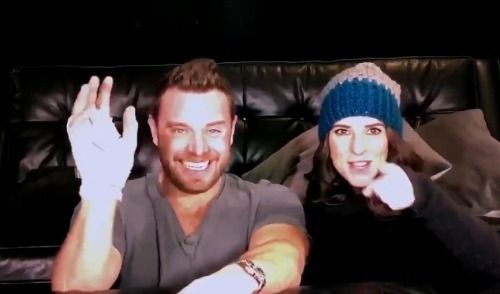 General Hospital (GH) spoilers reveal that Billy Miller (Drew) and Kelly Monaco (Sam) have a big event coming up. In a cute video, they promoted their next “Killy Live” gathering and offered some hints about what they’ll talk about. Monaco and Miller always like to give their fans something fun to enjoy.

Miller lifted up his hand at one point, which appeared to be bandaged. He suggested that people might be wondering what happened and who’s responsible. However, Miller wouldn’t reveal anything more! He noted that people would just have to wait for the “Killy Live” bash, which is rapidly approaching.

In the tweet that accompanied the vid, Monaco dished on some of the details. “Less than 2 weeks until #KILLYLIVE,” Monaco said. “#BILLYmiller and I are really excited to hang out with fans in #NYC, answer biting questions about #GH and then some! DON’T MISS OUT!”

If you love “Killy,” you’ll definitely love seeing your favorites at this event. It sounds like everyone who attends will have a blast. If you can’t go or you just don’t want to wait for secrets, Monaco and Miller have got you covered. The rest of the video contained some comical banter and revelations.

Monaco noted that people might want to know who’s the better kisser. Miller quickly declared, “Me.” They went on to talk about pasties as well as underwear! Monaco asked, “Do you prefer a thong or Granny panties?” Miller replied, “Thong on Billy.”

General Hospital viewers were cracking up over Miller’s sense of humor. They piped up in the replies to say they got a kick out of this video. This isn’t the first time Monaco and Miller have teamed up for some funny clips. They’ve done other “Killy Live” promotions in the past that were equally entertaining.

It looks like Monaco and Miller love to joke around behind the scenes. That’s good since their characters have more drama headed their way. General Hospital spoilers hint that Drew and Sam’s marriage will face some bumps in the road. At least their portrayers are on solid ground. There have been long-term rumblings about a real romance between Miller and Monaco.

Regardless, it’s always great when “Killy” shares something special on social media. We’ll give you updates as other GH news comes in. Stay tuned to the ABC soap and don’t forget to check CDL often for the latest General Hospital spoilers, updates and news.

Less than 2 weeks until #KILLYLIVE#BILLYmiller and I are really excited to hang out with fans in #NYC, answer biting questions about #GH and then some!

DON’T MISS OUT!
If you haven’t made plans to join the fun yet click here: https://t.co/jY1dcYzAOU pic.twitter.com/8VYBBBJmSA