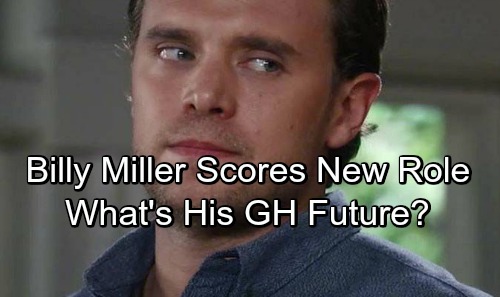 General Hospital (GH) spoilers tease that one ABC soap star just scored an exciting new role. Billy Miller (Drew Cain) is set to star in an Apple drama series. This thriller’s called Are You Sleeping, so it certainly sounds like a suspenseful, action-packed project.

Miller managed to lock in a recurring part, so viewers will be anxious to see his upcoming scenes. GH fans have always been impressed by Miller’s work. He made the role of Jason Morgan his own and ultimately excelled at a brand-new one. Billy Miller turned Drew Cain into someone many General Hospital watchers are rooting for. No matter who he’s paired with, Miller always has plenty of supporters.

You can bet lots of those supporters will make the jump to Apple with Miller. It should be interesting to meet his new character and learn a bit more about him. Deadline offered a few details about what to expect. This series, which stars Octavia Spencer and Lizzy Caplan, involves a murder mystery and a shocking investigation.

Spencer plays a reporter named Poppy Parnell, who uses her podcast to dig up deadly drama. Caplan’s pulling double duty as twin sisters, Lanie and Josie. The twins’ dad was brutally murdered decades ago, so Poppy decides to look into and hopefully find out the truth behind the guilty verdict.

Things are never as they seem on a show like this, so there’ll definitely be loads of twists and turns. Miller plays Lanie’s husband, Alex Dunn. Will he uncover any secrets about his wife’s father? Could he have a few secrets of his own? Anything’s possible when it comes to a daring crime story!

Miller’s other costars include Moon Bloodgood, Brett Cullen, Hunter Doohan are more. Are You Sleeping also has a big name backing it up. Reese Witherspoon’s production company is involved! Deadline’s calling this “the scripted drama venture of Chernin Entertainment and Endeavor Content and Reese Witherspoon’s Hello Sunshine.”

General Hospital spoilers hint that Miller still has a hot story coming up in Port Charles. Drew and Margaux (Elizabeth Hendrickson) are already hitting things off, so that should be fun. However, Miller is definitely putting himself out there and scoring some other roles.

What does that mean for Miller’s GH future? Time will tell, but it’s something to keep an eye on! We’ll give you updates as other news comes in. Stay tuned to the ABC soap and don’t forget to check CDL often for the latest General Hospital spoilers, updates and news.