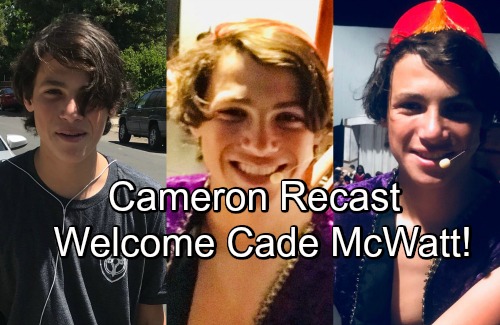 General Hospital (GH) spoilers tease that the teen scene will gain another major player soon. Josslyn (Eden McCoy) and Oscar’s (Garren Stitt) relationship has been moving along without too many obstacles. Some competition was inevitable and that’s where Cameron should come in.

Michael Leone previously portrayed Cam, but GH decided to bump the character up to the teen bracket with someone new. Cade McWatt will debut in the role on new GH episodes next week, July 2-6, and fans are already rooting for a new legacy pairing. Will Joss find herself falling for Cameron soon? Will she cheat and break Oscar’s heart? One way or another, young love’s about to get complicated in Port Charles.

We should mention that Cameron is the product of Liz’s (Rebecca Herbst) hookup with Zander Smith (Chad Brannon). Lucky (Jonathan Jackson) stepped up as a stand-in dad…well, sort of. He obviously hasn’t been around much! Regardless, there are no blood ties between Joss and Cam. GH could easily kick off a love triangle and that seems to be what they have in mind.

General Hospital fans will recall that Oscar had a different look when he first arrived in town. Rio Mangini played Oscar for two episodes, but he had to be replaced soon after. Once Mangini scored a role on Netflix’s Everything Sucks, he left quickly General Hospital behind.

Of course, Mangini had dark hair and an edgy style. It seemed like GH wanted Oscar to be a bad boy, but choosing Garren Stitt as a recast shifted that plan. It was like replacing “The Fonz” with Wally Cleaver! Based on Cameron’s new look, it appears General Hospital intends to fill that bad boy spot after all. Teen Cam could be trouble!

Social media has been blowing up with comments about Josslyn and Cameron’s potential romance. Twitter users are anxious to see what their chemistry is like. “I’m totally here for Joss and Cam becoming a thing,” one fan said. Another gushed, “I can’t wait for Joss to cheat on Oscar with Cam, let the games begin…”