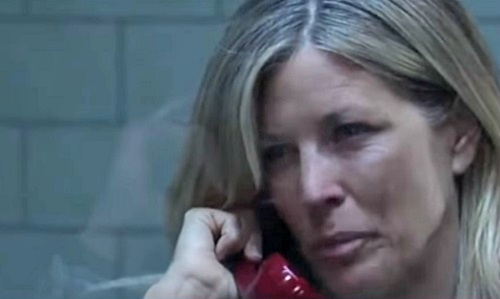 General Hospital (GH) spoilers tease that Carly (Laura Wright) will face extreme danger. She’s already caught in quite a mess thanks to Nelle (Chloe Lanier). Carly isn’t insane and she didn’t shove the schemer down the stairs. Unfortunately, everything seems to be going Nelle’s way and that trend will continue for a while. It sounds like Carly’s situation will get much worse before it gets better.

Jason (Steve Burton) and Spinelli (Bradford Anderson) are still struggling to find incriminating evidence against Nelle. Until they come up with something, Carly will appear guilty and Nelle will keep her plot in play. General Hospital spoilers state that Carly will run into trouble while she waits for help. Nelle’s sneaky plan will lead to unexpected consequences, so Carly will have to ride some waves.

At first, Carly will feel a bit optimistic. During the week of June 11-15, she’ll get some news that brings a relief. Carly might get a court date sooner than anticipated or perhaps Diane (Carolyn Hennesy) will work some legal magic to get Carly moved somewhere safer. There’s surely a better place for Carly to wait than Pentonville. 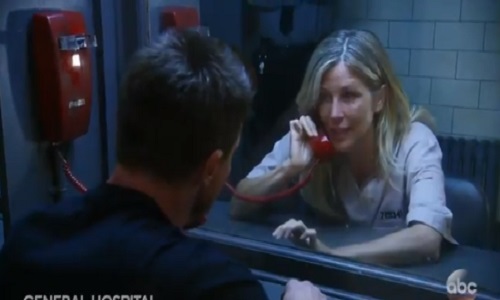 Eventually, Carly will head back to court and her official fate will be decided. General Hospital spoilers suggest that Carly will be deemed mentally unstable. She can’t believe that’s what she’s hoping for at this point, but that’s the tight spot Nelle’s left her in.

Carly will hope she can do her time and pretend the psychiatric facility stint has quickly rehabilitated her. Alas, that goal could come with some surprising snags. GH fans know Nelle can be awfully crafty. She’ll make a bold move nobody sees coming soon enough.

Does Nelle have some connections at this mental institution? It seems like a long shot, but stranger things have happened with Nelle. It’s possible she knows someone on the inside she can blackmail. Then again, Sonny’s (Maurice Benard) got oodles of enemies who could threaten the staff. Carly’s treatment could be sabotaged or her life could be on the line.

General Hospital spoilers say Carly will battle a terrible gut feeling. She’ll believe something just isn’t right, but she’ll have a tough time trusting herself. What’s lurking within the halls of the psychiatric hospital? Even if there’s no outside help from Nelle or Sonny’s foes, the place will be full of crazies. Carly could face a deadly threat from some nutty, violent patient.

Bottom line, peril is headed Carly’s way. She’ll realize she has to get home or die to try! GH viewers won’t want to miss the chaos ahead. We’ll give you updates as other details emerge. Stay tuned to the ABC soap and don’t forget to check CDL often for the latest General Hospital spoilers, updates and news.