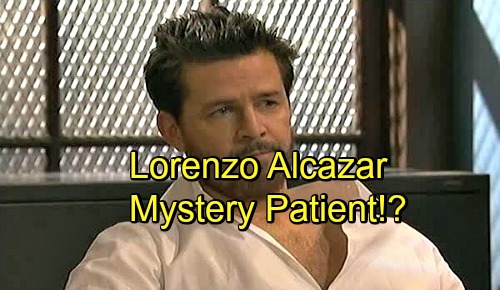 General Hospital (GH) spoilers tease Carly Corinthos’ (Laura Wright) Ferncliff neighbor may be someone truly shocking. We know this patient is a male and will be a familiar face to GH viewers. It sounds like Carly has a blast from the past headed her way. Could Lorenzo Alcazar (Ted King) be the one tapping out Morse Code and begging for help?

According to Soap Opera Digest, King will attend a General Hospital fan event on July 27. On this special occasion, cast members of the past and present will commemorate GH’s 55th anniversary. King hasn’t spoken out about a return to the show itself, but this upcoming appearance could be a good sign. It’s the first GH fan event invite King’s ever accepted, so he could be interested in staging a comeback.

Longtime General Hospital fans will recall that Lorenzo and Carly were married briefly in the mid-2000s. Sonny Corinthos (Maurice Benard) accidentally shot Carly in the head while she was giving birth to Morgan (Bryan Craig). He was aiming for Lorenzo, but ended up causing a traumatic brain injury for Carly. That led to Carly’s rift with Sonny, a “CarSon” divorce and eventual marriage to Lorenzo.

Carly and Lorenzo’s romance was partly based on hypnosis. Lorenzo gave Carly subliminal suggestions while she was in a coma, so she began to believe she loved him. Sonny later fought dirty for sole custody of Michael (Chad Duell) and Morgan, so Carly reunited with him for her children’s sake.

However, Carly ultimately divorced Sonny anyway. She then went back to Lorenzo, but her Sonny obsession came between them. After Lorenzo dumped her, Carly had a mental breakdown and spent some time in Shadybrook sanitarium. It’d be fitting for Carly to stumble across Lorenzo in another mental institution. Perhaps he’s just a few steps away at Ferncliff!

Lorenzo was killed off, but death never stops GH writers. If they have a great story to tell, it’s easy to offer soapy explanations. This could open up some interesting possibilities for a Lorenzo and Carly reunion. General Hospital spoilers have been hinting at “CarSon” trouble, but viewers haven’t seen it play out yet. Maybe that trouble could come in the form of Lorenzo.

GH could even bring King in as a new character. He give Julian Jerome (William DeVry) a run for his money with Dr. Kim Nero (Tamara Braun). After all, Braun was playing Carly in her Lorenzo days! Many fans would love to see King back on canvas somehow, so we’ll give you updates as other news comes in. Stick with the ABC soap and don’t forget to check CDL often for the latest General Hospital spoilers, updates and news.