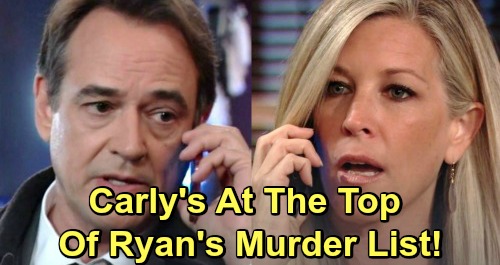 General Hospital (GH) spoilers tease that Carly Corinthos (Laura Wright) has made herself a target of Ryan Chamberlain (Jon Lindstrom). She had already been on his radar thanks to her mystery patient snooping and ongoing feud with Ava Jerome (Maura West), Ryan’s current obsession. However, Carly just made even more trouble by revealing her latest discovery to Ryan.

GH fans know Carly uncovered her old Ferncliff neighbor’s name. She told “Kevin” it was “Wilson” and that clearly left him on edge. Ryan has decided to make Carly pay, so he could have plans for another gruesome killing. When Ryan has a problem to solve, he usually tackles it with murder!

Ryan’s MO this time around has been to kill on holidays, and it’s only 12 stalking days ‘til Christmas! He still has Felicia Scorpio (Kristina Wagner) on his unfinished business list, so he probably plans to get to her eventually. For now, a threat needs to be dealt with and that threat is nosy, nagging Carly. Will Kevin prepare to murder Carly on Christmas Eve or perhaps Christmas Day?

The closer people get to figuring out his true identity, the more nervous Ryan becomes. He’s normally cocky about not getting caught, but we’re starting to see some fear slipping through. Ryan actually looked a bit scared when Carly brought up the mystery patient’s name. He kept the charade going and stalled by assuring Carly that he’d look into it, but he made her promise to stay quiet about it.

Of course, Carly had to admit that Sonny (Maurice Benard) knew. The possibility of becoming a mob hit probably didn’t give Ryan the warm fuzzies! Nevertheless, Ryan tends to view murder as his only way out. He’ll realize he could risk Sonny’s wrath by going after Carly, but he’ll undoubtedly think he can be careful. Despite his growing fears, Ryan’s brimming with confidence when it comes to his deadly crimes.

Carly and Laura Collins (Genie Francis) will continue to compare notes on “Kevin” and how different he seems lately. If Carly goes against “Kevin’s” wishes and mentions the name “Wilson” to Laura, it should ring a bell. Ryan went by “Todd Wilson” in Texas many years ago, which Laura should know. Even if it happens to slip Laura’s mind, Felicia would certainly recall that tidbit.

Lulu Falconeri (Emme Rylan) and Maxie West (Kirsten Storms) recently had a conversation about Todd Wilson as well. Ryan knows that name could jog someone’s memory and put his whole plan in jeopardy. That’s why he’ll take steps to silence Carly before everything falls apart.

Carly will be wary around “Kevin” thanks to Laura’s warning. She’ll be watching her back, which is good since Ryan’s circling like a vulture. Ryan may go after Carly, but it’s doubtful he’ll succeed in killing her. General Hospital spoilers suggest that Kiki Jerome’s (Hayley Erin) death was the biggie and Sonny probably has guards watching out for Carly anyway. You can’t be too careful with a killer on the loose!

Still, General Hospital viewers could certainly see some Christmas danger! Will there be a botched murder attempt or some other horrifying stunt? We’ll give you updates as other GH news comes in. Stick with the ABC soap and don’t forget to check CDL often for the latest General Hospital spoilers, updates and news.