General Hospital Spoilers: Carly Seeks Love Elsewhere After Sonny’s Betrayal – Who Will She Turn To? 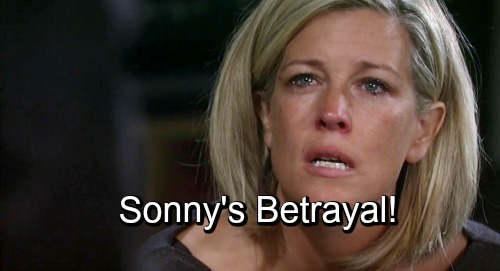 General Hospital (GH) spoilers tease that Sonny (Maurice Benard) could be inching toward a romance with Margaux (Elizabeth Hendrickson). After Margaux learned the truth about Jeanette’s (Ely Pouget) actions, she had a minor breakdown. Margaux was a mess, so Sonny wanted to watch out for her. He moved her to the couch, covered her up and even stayed the night by her side.

Once Sonny recapped the events of the evening, Carly (Laura Wright) was puzzled. She thought it sounded like Sonny felt sorry for the DA. Carly certainly doesn’t seem too concerned about Margaux and her feelings. No one can blame Carly since Margaux fought so hard to have her locked up!

DA Dawson wanted Carly at Pentonville, but she settled for Ferncliff. If it weren’t for her, Carly could’ve done a cushy stint at a private facility. She could’ve avoided Mary Pat (Patricia Bethune) and that whole Ferncliff nightmare. That could feed Carly’s rage as Sonny and Margaux grow closer. A dangerous bond could form, which probably isn’t good news for “CarSon.”

If Sonny ends up cheating, what will Carly do about it? One affair deserves another on a soap. Carly might as well betray Sonny right back! Of course, Carly and Sonny could actually split. In that case, Carly would be free to start a new romance entirely. If that happens, who should she turn to? There are several intriguing options on canvas.

Some GH viewers out there would like to see Carly (Laura Wright) with Jason (Steve Burton). It’s tough to believe that’ll happen since Jason’s inching toward Sam (Kelly Monaco) and it’d mean betraying Sonny. Jason seems to view Carly more like family at this point. Still, they do have an incredibly strong connection and that’s something to think about.

General Hospital spoilers say Franco (Roger Howarth) and Liz’s (Rebecca Herbst) wedding may be delayed soon. If their romance gets off track, could GH give Franco and Carly another try? They haven’t been in each other’s orbit lately, but anything’s possible down the road.

We should also point out Laura Wright has a real-life relationship with Wes Ramsey (Peter). They’d probably like to work together, especially as a pairing! GH has only let Peter and Carly interact briefly, but maybe more scenes are in store.

Maxie (Kirsten Storms) has other men in her orbit, so she could be paired up with someone else. Just because Maxie’s close to Peter now doesn’t mean it’ll last. It’d take a while for Sonny and Margaux’s potential romance to play out, so there would be time to move Carly in Peter’s direction.

Regardless, Carly may drift from Sonny eventually. Would you like to see Carly with somebody else for a change? We’ll give you updates as other General Hospital details emerge. Stick ABC’s GH and don’t forget to check CDL often for the latest General Hospital spoilers, updates and news.