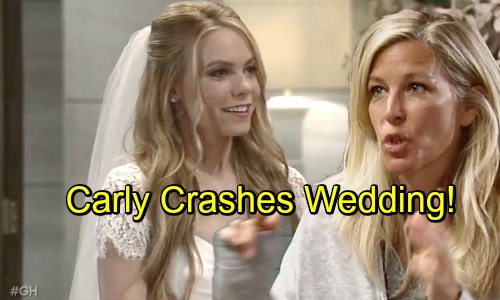 General Hospital (GH) spoilers tease that Carly (Laura Wright) will grow increasingly fearful. She knows Michael (Chad Duell) and Nelle’s (Chloe Lanier) wedding is rapidly approaching, but she’s still locked up in Ferncliff. Sonny (Maurice Benard) assured Carly that Michael could handle this, but she won’t be so sure. Carly’s mama bear instincts will kick in and that can only spell trouble.

The idea of letting Michael marry the enemy will push Carly to her limit. She’ll eventually realize she has to get out of there and stop the nuptials. Carly won’t want Nelle to lock Michael down and make him her next victim. She already lost Morgan (Bryan Craig), so the stakes are too high to ignore.

On a new GH episode on Friday, July 13, a frustrated Carly will lash out. General Hospital spoilers say she’ll demand to speak with Kevin (Jon Lindstrom) immediately. Of course, that request may or may not be granted. If Carly indeed speaks with Kevin, he’ll undoubtedly urge her to calm down and focus on herself. There’s no point in getting riled up over stuff happening on the outside.

However, Carly won’t let a little security prevent her plans. Even an institution for the criminally insane can’t hold Carly back! Carly isn’t ready to be released yet, so she won’t score her freedom that way. It’s also doubtful Carly will get some sort of free pass, especially to attend her alleged victim’s wedding. That’d be farfetched, even for the soap world!

Carly been deemed a danger, so she’s supposed to stay put until her recovery is complete. Unfortunately, Carly will be too afraid to remain at Ferncliff. She’ll believe it’s her duty to protect Michael, so it sounds like an escape’s brewing. Perhaps Carly will manage to sneak away and find some hidden exit.

Whatever the case, GH spoilers say Carly will become a wedding crasher. She’ll interrupt Michael and Nelle’s big day, so there’s bound to be some hot drama. After the chaos breaks out, Nelle will go for the poor victim act again. Maybe Chase (Josh Swickard) can use this as an opportunity to comfort Nelle and draw her closer.