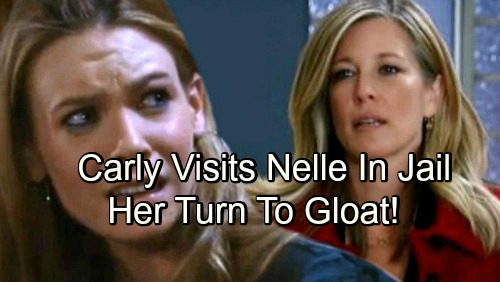 General Hospital (GH) spoilers tease that Nelle (Chloe Lanier) hasn’t reached the end of the road just yet. She’ll still be around during the week of August 6-10, which means there are more confrontations ahead. Nelle already had a fierce faceoff with Michael (Chad Duell). Her showdown with Josslyn (Eden McCoy) will also provide some raging closure.

Of course, Nelle will undoubtedly spar with Chase (Josh Swickard) as well. Since we know her run has at least a few episodes left, it seems she’ll indeed land behind bars. Nelle could always pull a Liesl (Kathleen Gati) and escape during transport, but she’ll have to deal with some PCPD drama first.

Chase will inevitably confront Nelle with all the evidence against her. He’ll gloat about finally putting Nelle away, but she won’t let him see her sweat. If Nelle’s going to prison, she’s going to do it with her head held high.

As twisted as it is, Nelle’s probably proud of everything she’s accomplished. She came to Port Charles on a mission to destroy Carly’s (Laura Wright) life. Nelle pulled that off for quite some time. She even made a mess for the rest of Carly’s family.

Thanks to the baby swap, Nelle will leave behind a scheme as a parting gift. She’ll feel great about doing so much damage to people she despises. Michael set Nelle up, so she’ll be glad Brad’s (Parry Shen) going to keep his own child from him. Nelle won’t think Michael deserves to raise their son.

It’s possible Nelle will drop a cryptic hint before she goes. She’s the kind of gal who really likes to rub things in, so she may say something that will only make sense to Michael later. Nelle won’t want to tip him off to the truth. If she can’t have her baby, she won’t want Michael to have him either.

General Hospital spoilers say Chloe Lanier’s last scenes will be with Laura Wright, so those will probably come after Carly’s been cleared. Jason’s (Steve Burton) working hard to make that happen. It shouldn’t be long until Carly’s free to go home – or to go see Nelle in prison.

Nelle may be held at Pentonville to await trial. She might even go for a plea deal to shave some time off. Regardless, Carly could pay Nelle a visit while she’s locked up. GH fans know Carly would love to be on the right side of the glass partition this time!