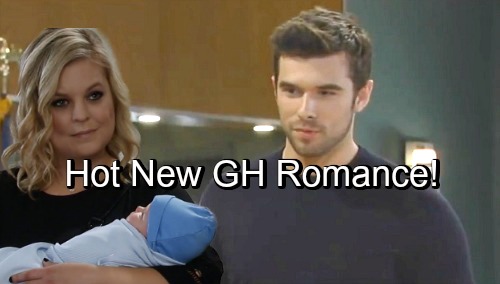 General Hospital (GH) spoilers tease that Chase (Josh Swickard) will need someone to lean on soon. After the crash that put Michael (Chad Duell) and Nelle’s (Chloe Lanier) lives on the line, Chase felt guilty about the botched plan. The car accident didn’t cause the baby’s death, but Chase still feels responsible for how it all went down. He’s pleased that Nelle’s behind bars, but this isn’t the outcome he wanted.

Nevertheless, both Michael and Chase will have to move on. General Hospital spoilers say Michael will lean on his family for support, but what about Chase? Finn’s (Michael Easton) stuck in Anna (Finola Hughes) and Cassandra (Jessica Tuck) drama right now, so he’s out. Perhaps Chase will find comfort with a new love interest instead.

Lulu (Emme Rylan) is an option since she let Chase stay the night after he got drunk, but we’d say she’s the least likely. GH might’ve been doing a bit of a chem test just in case, but it looks like they intend to keep Lulu single for a while. She believes Dante’s (Dominic Zamprogna) off on an important mission, so it’d be strange for her to give up on his return so quickly.

There are also plenty of “Chiki” fans out there, but Chase and Kiki have yet to share a scene. It’s possible they could be there for each other since Kiki will be dealing with heartache as well, but it’d be weird without any foundation to build on. General Hospital should’ve set something up by now if they wanted that scenario.

Who does that leave for Chase? Maybe Maxie (Kirsten Storms) is the way to go. Chase is Nathan’s (Ryan Paevey) replacement at the PCPD, so that’d be awfully soapy. Maxie clearly has some lingering feelings for Peter (Wes Ramsey), who intends to stay in Port Charles. However, a lot’s happened between them. Maxie may not be willing to forgive and forget anytime soon.

Even if General Hospital intends to pair Maxie and Peter up eventually, they may need a filler pairing in the meantime. Chase and Maxie could fit the bill. Many GH viewers have been complaining about Chase’s lack of action in PC. He had some steamy flashbacks with Nelle, but he deserves a passionate romance in the present.

It’s worth mentioning that Josh Swickard would be all for Chase and Maxie as a couple. In an interview with Michael Fairman, Swickard admitted he was on board. “Personally, I love Kirsten Storms and she is such a powerhouse on General Hospital,” Swickard said. “We worked really well together when we shot our scenes…I think the pairing would be great.”