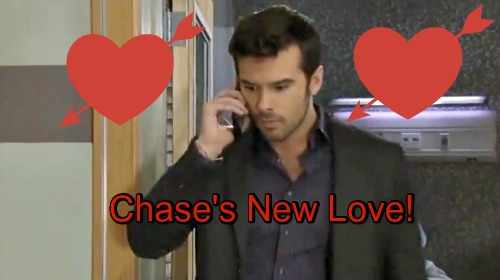 General Hospital (GH) spoilers tease that several complex love stories are ahead in Port Charles. Some romances have recently fallen apart and others are trying to get started, but all GH characters need someone special in their lives. There’s one hunk who remains single and presumably lonely, but many fans are hoping that changes soon.

Of course, we’re talking about the very caring and handsome Chase (Josh Swickard)! He’s got a big heart and good looks to go along with it. Chase deserves to have a lovely lady by his side, but General Hospital’s dragging their feet for some reason.

However, things could shift as we head into the fall. Perhaps the show will give us some signs about Chase’s first GH pairing. There have already been a couple potential chem tests. Chase had some scenes with Maxie right after James’ birth. General Hospital might’ve been testing them out in case they wanted to go in that direction one day.

Maxie seems poised to become a couple with Peter (Wes Ramsey) eventually, but it never hurts to look at other options. That might’ve been what GH was doing. Lulu (Emme Rylan) also took Chase home with her after he had too much to drink and misplaced his keys. It established a bond between them that could grow down the road.

If GH ultimately recasts Dante (Dominic Zamprogna), they’ll probably take the Lulu and Chase route. It would rev up the drama if Dante comes home and learns Lulu got together with his PCPD partner! Still, General Hospital spoilers hint that Lulu will remain faithful to Dante for a while. She’ll stay busy with work and other family issues, so that doesn’t solve our Chase problem right now.

Who could be paired up with Chase in the near future? Valerie (Brytni Sarpy) might be a nice option. She’s got some scenes coming up, so General Hospital could be working toward this. There are even rumblings about Valerie serving as Chase’s partner. They could start spending plenty of time together and hopefully form a connection.

Francesca (Celesta DeAstis) might be another possibility. Michael’s (Chad Duell) focused on his grief at the moment, but he’ll have to move on sooner or later. If Chase snatches Francesca up, that could rock the boat between Chase and Michael. They’re becoming friends, so it might be fun to set up a love triangle here.

Some viewers are rooting for Kiki (Hayley Erin) and Chase, but GH doesn’t seem interested in that plan – at least not yet. General Hospital spoilers say Kiki will drift toward Griffin (Matt Cohen) this fall, which makes sense considering the story that’s been playing out. Nevertheless, Kiki and Chase could get together somewhere down the line.

For now, Valerie and Francesca seem like Chase’s best options. Do you want Chase to find a love interest? Who’s your top pick? We’ll give you updates as other GH news comes in. Stay tuned to the ABC soap and don’t forget to check CDL often for the latest General Hospital spoilers, updates and news.