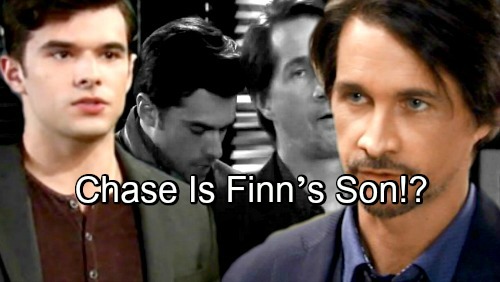 General Hospital (GH) spoilers tease that there’s more to one family feud than meets the eye. Hamilton Finn (Michael Easton) has been furious with Gregory Chase (James Read) for decades. He claims it’s because his father moved on too quickly after his mother’s death, which was undoubtedly devastating. Finn lost his mom and felt like his dad never truly grieved.

However, there seems to be pain that runs deeper. Harrison Chase (Josh Swickard) was innocent in all this, but Finn still kept him at a distance for years. He never wanted anything to do with his half-brother, which raises questions of what else was going on. Perhaps there’s a reason Finn always linked his hatred of Gregory to Chase.

GH fans know Finn was in college when his mother died, and his father remarried soon after. It wasn’t too long until Chase was born. That means Finn is older than Chase by about 20 years or so. Chase would naturally be a reminder of their father’s fast remarriage, but there could be some dirty details.

Gregory may have cheated with Chase’s mother while Finn’s mom was dying. If so, Chase could be the result of that affair. Then again, there could be a soapier reason for all the hostility. Nothing splits up a family of men quicker than fighting over a woman.

What if Gregory stole Finn’s girlfriend and started a new life with her? In that case, Finn’s girlfriend would’ve been cheating as well. That would’ve been a double blow for poor Finn. Of course, it would also open up an interesting possibility. If Gregory and Finn were having sex with the same woman, there’s a chance that Chase is Finn’s son instead of his half-brother!

GH writers have certainly resorted to love interest sharing before. For example, Ava Jerome (Maura West) was sleeping with both Morgan Corinthos (Bryan Craig) and Sonny Corinthos (Maurice Benard) around the same time. That led to Avery Corinthos’ (Ava and Grace Scarola) paternity mystery. Maybe General Hospital’s ready for a grown-up twist on this classic story.

Finn may not even be aware that Chase is his son. Chase’s mother might’ve convinced Gregory to pass the baby off as his. That could be the reason they rushed to the altar. Gregory would’ve wanted to preserve their romance and Finn was determined to run from this dysfunctional family anyway.