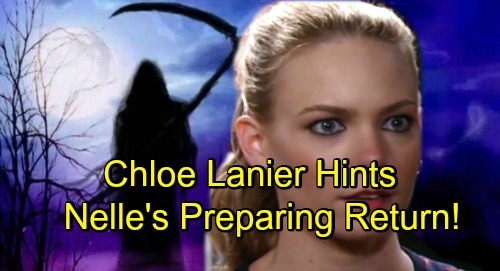 General Hospital (GH) spoilers reveal that Nelle’s (Chloe Lanier) still scheming behind bars. During a recent chat with Michael (Chad Duell), Kim (Tamara Braun) admitted that Nelle had reached out to her. She was hoping the doc would claim her hormones caused her crazy behavior, but Kim naturally refused. Nelle knew exactly what she was doing, so she’ll have to suffer in prison for a while.

However, that won’t be the last we hear of Nelle. GH undoubtedly has big plans to bring her back somewhere down the line. Chloe Lanier is excited about the possibility of future stints on the show.

She wasn’t interested in being locked in with a contract, but that doesn’t mean she wants to ditch the character entirely. Nelle must be a real thrill to play, so Lanier would gladly return for more drama.

Many fans have tweeted Lanier about missing her on General Hospital. In response to one viewer, Lanier speculated on what Nelle might be doing in the slammer.

Her humorous take probably isn’t too far off! “I imagine Nelle started crossfit training behind bars so she can kick some serious ass if/when the time comes for revenge,” Lanier teased.

Nelle certainly isn’t a quitter. She proved that when she got in touch with Kim and tried to wiggle out of trouble. You can bet Nelle will try other strategies in the coming months.

She’s not going down without a fight, so Port Charles had better brace for additional chaos. One way or another, Nelle will be back. General Hospital would’ve killed her off if they didn’t have something else in mind.

Lanier mentioned some physical training for Nelle, but her mental state is probably what’s important. Now that Nelle’s been locked up, she’s got nothing but time on her hands. Of course, Nelle’s using that time to plot vengeance. She’s likely becoming even more unhinged thanks to the rage that’s building.

When General Hospital decides it’s the right moment, they can bring Nelle back on the scene. There are several ways they can do that. One would be some legal loophole that gets Nelle off the hook. Perhaps Chase (Josh Swickard) wasn’t as careful as he thought. Just a little mistake may be enough for a good lawyer to capitalize on.

Another option would be to let Nelle escape. General Hospital spoilers say that might be the most exciting route. It would also make the most sense considering Lanier doesn’t want to stick around permanently. Nelle could wreak a bit more havoc and get locked up once again.

No matter how it plays out, Nelle’s revenge should be bitter and brutal. Michael (Chad Duell), Carly (Laura Wright), Sonny (Maurice Benard), Josslyn (Eden McCoy), Ava (Maura West) and Chase should all watch their backs!