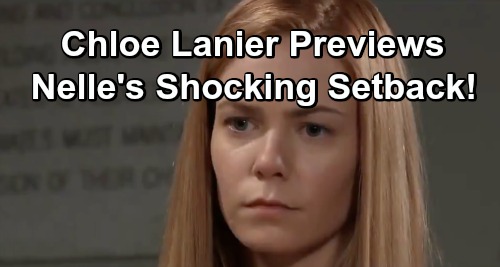 General Hospital (GH) spoilers tease that Nelle’s (Chloe Lanier) comeback will add some excitement to the baby swap storyline. Things had fizzled a bit thanks to other storylines, but they’re quickly revving back up. Willow (Katelyn MacMullen) was recently revealed as “Wiley’s” birth mom and Liesl Obrecht (Kathleen Gati) found out the very much alive baby she delivered was believed to be dead.

Since Liesl knows something’s up, she won’t rest until she learns the truth for herself. General Hospital spoilers say Liesl’s headed to Pentonville, so Nelle’s in for a shock. In an interview with Soap Opera Digest, Chloe Lanier talked about her latest return to GH. She was eager to slip back in the role and deliver some good drama.

“I couldn’t be happier that I’m getting the chance to come and visit,” Lanier said. “I love everyone over there and of course, playing Nelle is always fun.” Lanier talked about how her visits have pulled her out of Nelle’s previous bubble.

She worked with Steve Burton (Jason) and Kelly Monaco (Sam) during her last brief stint and this time she had the chance to work with Kathleen Gati (Liesl Obrecht).

However, this obviously isn’t the first time Liesl and Nelle have interacted. That special delivery will come back to haunt Nelle, but Lanier promised her character would make a decent pitch for Brad (Parry Shen) and Lucas (Ryan Carnes). After Nelle confesses, she’ll insist that Liesl can’t take her baby boy away from his loving guardians.

Is this about keeping her revenge plan in play or does Nelle genuinely care about Jonah’s well-being? Perhaps it’s a little of both, but Lanier suggested that this is about more than just vengeance. “I really believe that Nelle wants her son to be with Brad and Lucas, considering the fact that she thinks they will be way better at parenting than Michael would be.”

Lanier argued that Nelle views Michael as unreliable, but we all know the schemer wants to stick it to her “baby daddy,” too! Nelle lost her freedom because of Michael and Chase’s (Josh Swickard) plot, so she’s savoring her chance to make Jonah’s father suffer.

As for what’s coming down the road, Lanier isn’t sure what other tricks GH has in store in “the Nelle plan.” Regardless, she’s more than willing to come back for more popups. Lanier has enjoyed working with new people, but also she’s missing her old costars. She noted that she’d like to work with familiar faces like Maura West (Ava), Laura Wright (Carly) as well as Swickard and Duell.