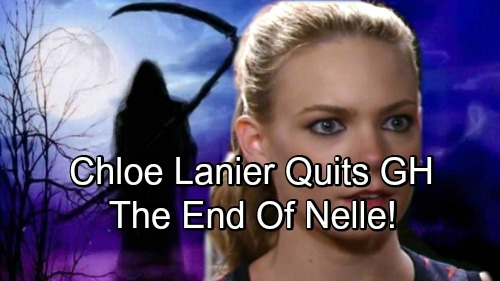 General Hospital (GH) spoilers indicate that actress Chloe Lanier who plays Nelle, the most hated character in Port Charles, has quit the ABC soap. The actress is best known for her role as Janelle “Nelle” Hayes, the secret stepsister of Carly Corinthos (Laura Wright).

According to Daytime Confidential Chloe Lanier decided to not renew her contract, leaving General Hospital and daytime television in general, in order to pursue new opportunities in both primetime and films. Chloe wraps up filming this week, June 29, which means he final airdate should be around the middle of August unless she filmed extra scenes.

Chloe Lanier first made her debut on General Hospital back in 2015 as Luke’s (Anthony Geary) and Bobbie’s (Jackie Zeman) big sister Patricia Spencer. She quickly managed to impress the show’s producers with her outstanding talent, leading the writers to create a new role for her.

Chloe made her debut as Nelle back in 2016. She arrived in Port Charles seeking revenge after finding out that her father sold her kidney to Carly’s ex-husband Jasper Jacks (Ingo Rademacher) in order to save their daughter Josslyn (Eden McCoy).

Since then Chloe has been causing nothing but drama and chaos for the Corinthos family. Just recently she claimed that Carly had pushed her down the stairs during her baby shower at the Quartermaine mansion.

As a result, Carly has been forced to claim insanity in order to avoid jail time for attempted murder. She is currently locked up at the mental institution Ferncliff while a pregnant Chloe is awaiting the birth of her first child.

In addition to her work on General Hospital, Chloe has also appeared in a number of films, including Binding Paper, North Blvd, Pie, and Quail Lake. No doubt that Chloe Lanier’s talent will earn her plenty of fame and fortune. Now that we know Nelle is leaving the speculation will begin as to whether she leaves Port Charles dead or alive!

So far General Hospital producers have made no comments about Chloe Lanier’s decision to leave the show. In the meantime, don’t forget to check back with CDL for all the latest news, updates and spoilers on General Hospital and all of your favorite daytime television soaps right here.