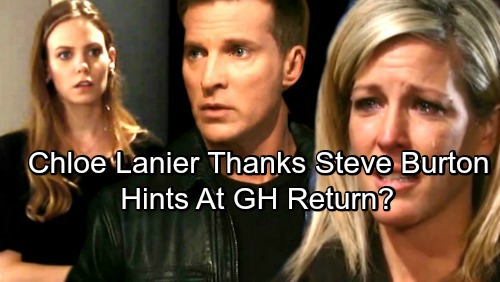 General Hospital spoilers reveal that GH star Steve Burton has nothing but positive things to say about his co-star Chloe Lanier as she wraps up this run as the villainous Nelle Benson on the ABC soap. The actor took to his Twitter account to praise the 25-year-old actress and she prepares to say good-bye to her daytime soap fans on General Hospital.

Steve took to his Twitter account to send Chloe his well wishes. The actor wrote, “We know how well deserved your Emmy is from watching your performance throughout this story. You are a Rockstar. You will soar. Continue to work as hard as you do and nothing will stop you. All the best to you @chloelanier – sb.”

Chloe responded by thanking Steve for his words of encouragement. She also said that she loved working with him throughout the years and hopes to work with Steve again in the future. Well Chloe Lanier knows that working with Steve Burton in the future means a return stint on General Hospital!

Since Nelle is NOT being killed off and Chloe has made it clear she is open to a return to Port Charles General Hospital fans can expect a huge return in the future. Let’s not forget that Nelle is leaving a son behind and savvy GH fans know she will be coming back for her boy.

Chloe recently told ABC Soaps in Depth in an interview that her plan was to stay with General Hospital for only a few short years before moving on. She also said that working five days a week on the set of the soap made it difficult for her to go on other auditions.

In addition, the talented young actress also hinted that she would love to produce her own material in the future, too. Chloe is hoping to move on to bigger projects both on the small screen and the big screen in the entertainment industry.

In the meantime, don’t forget to check back with CDL for all the latest news, updates and spoilers on General Hospital and all of your favorite daytime television shows right here.

Steve, thank you for your sweet words of encouragement! This means so much. Thank you for being so open and remarkable to work with. I hope we get the chance to do it again! 💙 https://t.co/DBud3TyPXe