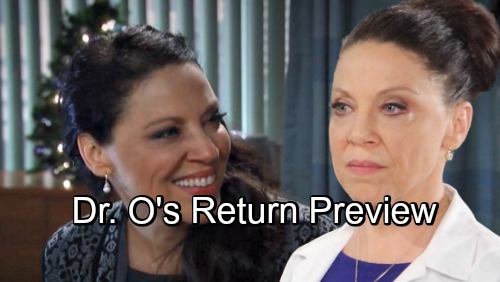 General Hospital (GH) spoilers tease that Liesl Obrecht (Kathleen Gati) will return for more drama. In a stunning twist, Liesl managed to crash her prison transport and make a quick getaway. She even found time to deliver Nelle’s (Chloe Lanier) baby and set up some major leverage for herself.

Obrecht’s been forced into life on the run, but she’s definitely got a few tricks left up her sleeve. General Hospital fans should never count her out! Chris Van Etten, one of GH’s co-head writers, offered some hints about where things are headed in this storyline. He gave a fall preview for Liesl, so that could mean we’ll see her sooner rather than later.

Van Etten promised, “As long as I’m working here, Liesl Obrecht is never far from my mind! Her running away from Port Charles was engineered in such a manner that her reappearance is all but inevitable.” Since Van Etten’s such a fan of the character and her shenanigans, it sounds like Liesl’s going to show back up down the road.

There’s a good chance knowing Nelle’s secret will come in handy. Liesl helped Nelle give birth to a healthy baby boy. She’s going to wonder what’s up if she finds out Michael’s (Chad Duell) side of the story. Dr. O could easily hear it through the grapevine and dig a bit more. She has a complicated history with Brad (Parry Shen), who’ll certainly be on edge in the coming months.

That could put Brad in a position where he’ll crack under pressure. He’s helped out with Obrecht’s schemes in the past, so she may want to revive their partnership. Liesl might seek some favors if her situation takes a tough turn. If her back’s against the wall, she won’t hesitate to blackmail Brad into providing assistance.

General Hospital spoilers say Brad will have a reason to be fearful this fall. He’ll feel like his plan’s falling apart, so working with Obrecht might actually be beneficial – at least at first. Nevertheless, disaster’s sure to strike anyway. Brad can’t keep the truth about “Wiley” under wraps forever!

It looks like some explosive scenes are brewing. We’ll give you updates as other GH news comes in. Stay tuned to the ABC soap and don’t forget to check CDL often for the latest General Hospital spoilers, updates and news.