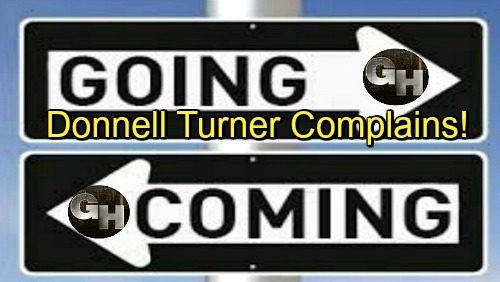 General Hospital (GH) spoilers tease that we’ve got some comings and going news to share. First, let’s talk about a couple of big returns. Lexi Ainsworth is returning as Kristina later this summer, so that should be a fun comeback. It looks like Kristina may be coming home alone, which might mean things went south with Parker (Ashley Jones) in Oregon.

Will Kristina find someone new to love in Port Charles? Time will tell, but many GH fans will be glad to have her in town again. Meanwhile, we can get excited about another familiar face. Brytni Sarpy will resume filming soon, so Valerie should have something to do. General Hospital spoilers hint that Valerie may become Chase’s (Josh Swickard) new partner at the PCPD.

If so, could that lead to clashing or maybe even a complicated romance? Regardless, GH needs to get Chase a love interest ASAP! He’s too handsome to waste on just detective duties. General Hospital spoilers say Chase has some family drama on the way, but maybe he can squeeze in some dating, too.

Of course, we’ll have to say goodbye to Vinessa Antoine’s version of Jordan soon. In the latest issue of Soap Opera Digest, one of GH’s co-head writers offered plenty of praise for Antoine. “She brought so much heart to the role and I always found her a very believable police commissioner,” Shelly Altman said. “She is leaving behind a character that she invested with great strength, passion and wisdom.”

However, the show must go on. General Hospital wants Jordan to remain on canvas, so a recast will hit PC before long. Jordan is set to have “a great story moving forward” according to Altman. Oddly enough, Donnell Turner (Curtis) doesn’t seem excited about the material he’s getting. He recently complained on Twitter, so maybe Jordan’s story won’t be so great for him!

A fan tweeted Turner about Curtis needing more scenes and a better story. Turner agreed and offered some criticism about what’s been playing out so far. He replied, “I would absolutely LOVE that! I love GH yet I’m not quite sure WTH! Very discouraging, frustrating and unfortunate. SMH.”

Turner probably wouldn’t be griping if he had good stuff coming up. That could mean Jordan and Curtis are headed for a split. She may get her own storyline – at least for a while. General Hospital spoilers say some major shakeups are looming, so stay tuned.

Donnell is a fan favorite and a great actor – why won’t TPTB at GH feature him in a major story of his own? That’s it for comings and goings. We’ll give you updates as other GH details emerge. Stick with the ABC soap and don’t forget to check CDL often for the latest General Hospital spoilers, updates and news.

I would absolutely LOVE that! I love GH yet I’m not quite sure WTH! Very discouraging, frustrating and unfortunate. SMH https://t.co/TH3VLSszqe