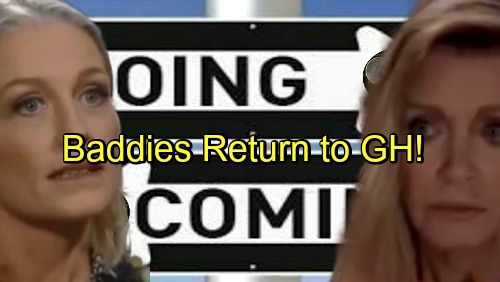 General Hospital (GH) spoilers tease that we’ve got some comings and goings news to pass along. For starters, let’s talk about Madeline (Donna Mills). She showed up in Friday’s episode, August 17, for a chat with Maxie (Kirsten Storms) and Nina (Michelle Stafford). Their conversation certainly took a couple of interesting turns!

Madeline gave an awfully convincing performance as she cried over Nathan (Ryan Paevey) and apologized for how she treated Nina. Of course, it turned out to be a tearful ploy. Madeline just wanted Nina and Maxie to speak at her parole hearing, but they quickly shut down the idea.

General Hospital spoilers say Madeline will be back for another appearance on Monday’s new GH episode, August 20. Valentin (James Patrick Stuart) will do his best to pry info out of her. When it comes to Nina’s history, Valentin will feel like Madeline knows more than she’s letting on. They’ll have a tense discussion as Valentin inquires about the baby Nina’s believed to have lost.

It looks like that baby pulled through after all. Valentin will soon be convinced that Nina’s got an adult daughter out in the world. Chances are good she’s either in Port Charles or will be on her way there soon! GH fans will be eager to see all the stunning twists of this storyline.

In the meantime, Cassandra (Jessica Tuck) will head back to General Hospital as well. Anna (Finola Hughes) was the bait that brought Finn (Michael Easton) into a new mess. He’s been tasked with bringing Cassandra out of her coma, so he’ll have to work fast. Their captors won’t wait around forever!

Finn may take a peek at Cassandra this week, August 20-24, and possibly administer some drugs. He’ll do whatever he can to work a miracle. Anna’s life could depend on it, so that’ll be a powerful motivator. Finally, Chandra Wilson is making a return to GH. The Grey’s Anatomy actress was last spotted playing a patient in 2014, but she’ll be portraying a different character this time around.

Wilson will soon debut as Linda Massey, a therapist Curtis (Donnell Turner) turns to for help. Stella (Vernee Watson) and Jordan (Vinessa Antoine) clearly need some help getting on the same page. General Hospital spoilers hint that their first session should be heated, but hopefully productive, too.