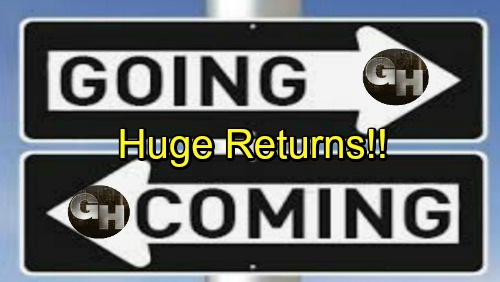 General Hospital (GH) spoilers reveal that there’s some comings and goings news to share. First, let’s talk about a fun return. Brooklyn Rae Silzer is headed back to Port Charles as Emma Drake. She’ll pop up pretty soon for a visit with Anna (Finola Hughes), so that should be a nice distraction from all the Heinrik chaos. Anna should enjoy taking her mind off her troubles with Emma by her side.

Tristan Rogers (Robert Scorpio) also has a comeback stint coming up. GH fans can look for Robert to arrive back in town on Friday, April 13. General Hospital spoilers hint that Robert and Anna will team up, so it sounds like they could get a step closer to finding Heinrik. Anna will hit another dead end soon, but she won’t lose heart. She needs to track down her son and she’s not giving up until she does.

Next, there’s been some confusion about a handful of characters. On April 5, General Hospital’s Twitter account sent out an announcement. They included a pic featuring some basketball stars in physician lab coats.

However, it seems this was really about their appearances for the CBB Awards. College GameDay tweeted out a fun promo for a clip that played during the show. As the earlier tweet mentioned, three major GH characters pitched in. It looks like they changed their usual roles just a bit!

In the clip, Kiki shouts that her husband’s on the hospital board. Griffin (Matt Cohen) fires back, “If he were here right now, I’d confront him!” Obviously, Kiki doesn’t have a husband to confront. They’re just messing around for drama’s sake, but that makes it even funnier. Curtis (Donnell Turner) also took part in this daytime drama and sports crossover. It’s certainly worth a view!

That’s it for comings and goings this week. We’ll give you updates as other GH details emerge. Stay tuned to the ABC soap and don’t forget to check CDL often for the latest General Hospital spoilers, updates and news.