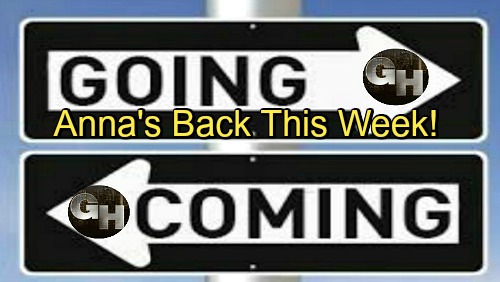 General Hospital (GH) spoilers tease that we’ve got some comings and goings news to pass along. For starters, let’s talk about a couple of returns. Finola Hughes will return as Anna this week, August 6-10, so GH fans will get more info on her kidnapping and whereabouts. There should be some scenes to fill in the gaps and explain how Anna ended up in her current predicament.

Anna’s being held somewhere against her will, but Finn (Michael Easton) and Robert (Tristan Rogers) have a plan to save her. Naturally, there are plenty of ways this plot could go wrong. General Hospital spoilers say some crazy twists are looming, which should bring some danger for all parties involved.

Things will get tricky for Finn and Anna, but you can bet Robert (Tristan Rogers) will come through for them eventually. If the plot starts to fall apart, Robert will inevitably adjust his scheme and keep the hostages alive. General Hospital viewers won’t want to miss the excitement of this big adventure.

Leslie Charleson will also reprise her role as Monica on this week’s new GH episodes, August 6-10. Will she drop by the police station and give Nelle (Chloe Lanier) a piece of her mind? GH seems to be giving Nelle and her enemies closure, so that’s certainly a possibility.

Monica tried to show Nelle love at the Quartermaine mansion, but she won’t have any left to give. It’s clear that Nelle has lost every single ally at this point.

Even if Nelle and Monica don’t get a final faceoff, it should be nice to see Charleson back. Patty McCormack was a fantastic temporary recast, but most of us missed the real deal. As for Nelle, Chloe Lanier’s stint will come to a close. Nelle’s last scenes will air this week – and they’ll include her worst nightmare, Carly (Laura Wright)!

General Hospital has relied on Nelle for a good chunk of the drama lately. There are definitely some haters out there, but she was never boring. Nelle will leave a void behind, but other schemers and stories should pick up the slack soon enough.

Of course, there’s always a chance that Nelle will return one day. It looks like she’s headed to prison, but she could escape or exploit some botched part of the case. Chase (Josh Swickard) might’ve made a mistake that’ll come up later. A hotshot lawyer could surely undo the damage in soap land!

For now, GH viewers will have to bid nutty Nelle farewell. That’s it for comings and goings! We’ll give you updates as other details emerge. Stay tuned to the ABC soap and don’t forget to check CDL often for the latest General Hospital spoilers, updates and news.