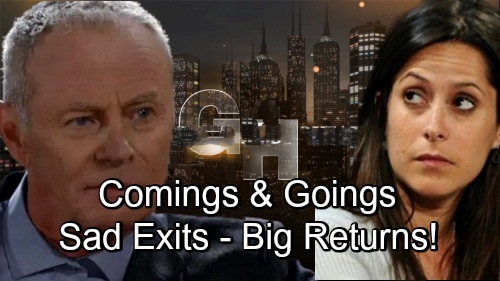 General Hospital (GH) spoilers tease that there’s some comings and goings news to share. First, let’s address an offscreen exit. Nina (Michelle Stafford) received word that Madeline (Donna Mills) was found dead at Pentonville, so that wraps up Mills’ brief stint at GH. However, Valentin seemed to know more than he was letting on. That leaves us with a couple options to consider.

Valentin visited Madeline shortly before this deadly outcome. It seems likely that Valentin was either behind Madeline’s death or faked it in exchange for info. Will the truth come out eventually? Time will tell, but Valentin’s just focused on finding Nina’s daughter for now. General Hospital spoilers say his search for answers will bring a surprising outcome.

In other GH news, Tristan Rogers’ (Robert) latest stint is also coming to an end. Rogers recently tweeted that he shot his last show on August 18. He isn’t sure if or when General Hospital will ask him back. Rogers suggested that only Frank Valentini, GH’s executive producer, knows what the future holds.

Many General Hospital viewers love Robert, so this undoubtedly isn’t the end of the road. Robert may take a short break or a long one, but we surely haven’t seen the last of Scorpio! It turns out Robin (Kimberly McCullough) has a GH comeback planned, which is great to hear. You can expect to see Robin pop up again this fall, so that’s something to look forward to.

Of course, we should also talk about Ryan’s return. Jon Lindstrom is pulling double duty again, so he spoke out about it in the newest issue of Soap Opera Digest. “To have this incredibly unexpected reprise of this character that for some reason is so beloved was really a welcome thing to me,” Lindstrom said. He’s excited to revive Ryan’s ruthless behavior and have a little fun in Port Charles.

Are you anxious to see what’s next in the Kevin (Jon Lindstrom) and Ryan saga? Felicia (Kristina Wagner) and Laura (Genie Francis) will inevitably face some shockers sooner or later! We’ll give you updates as other GH details emerge. Stay tuned to the ABC soap and don’t forget to check CDL often for the latest General Hospital spoilers, updates and news.