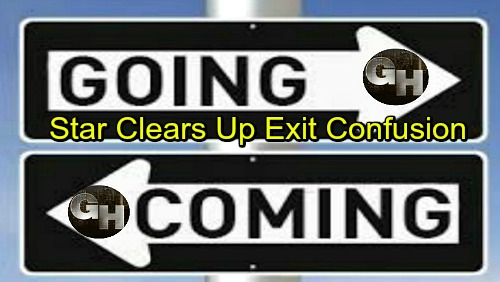 General Hospital (GH) spoilers tease that we’ve got some comings and goings news to pass along. For starters, Robin’s (Kimberly McCullough) latest stint has wrapped up. Anna (Finola Hughes) flew to see her daughter with Finn (Michael Easton) by her side. Now that Robin knows the whole Peter (Wes Ramsey) story, she’ll continue to process her feelings and get in touch with Anna later.

In the meantime, GH watchers can await more Milo (Drew Cheetwood) scenes. Sonny’s (Maurice Benard) currently got a lot on his plate, so Milo’s services will be needed. According to Soap Opera Digest, Cheetwood reported to set on June 8. General Hospital spoilers say Milo will show up on screen in early July, so stay tuned for all the drama ahead.

In other GH news, Dominic Zamprogna is leaving the role of Dante. The buzz was really starting to build so Zamprogna felt it was time to confirm it as the truth. He revealed that he’s already taped his final scenes, so catch Zamprogna in the part while you can!

General Hospital is keeping a tight lid on what’s in store for Dante. Will they recast or find a way to explain his absence? It’s possible Dante will leave town for a while and come back with a very different look. There’s always a chance GH will kill Dante off, but it’d be cruel to kill another son of Sonny’s.

Plus, they did a whole death arc with Nathan (Ryan Paevey) not too long ago. It’d be repetitive to do a similar storyline so soon. It seems likely that Dante will survive, but General Hospital fans will certainly miss Zamprogna.

However, there was a little misunderstanding after Zamprogna sent out his tweet. Some viewers mistakenly thought Lisa LoCicero (Olivia) was departing, but she set the record straight on Twitter. LoCicero indicated that she’s not going anywhere and neither is Wally Kurth (Ned) She said, “I think some people are confused.. I’m not leaving, nor is @wallykurth .. it was @dom_zamprogna tweeting..”

Thankfully, Ned and Olivia will be around for more PC mayhem. That’s it for comings and goings! We’ll give you updates as other GH details emerge. Stay tuned to the ABC soap and don’t forget to check CDL often for the latest General Hospital spoilers, updates and news.

Thank you my brother and friend. The feeling is mutual as you know. https://t.co/qoasbmonUN