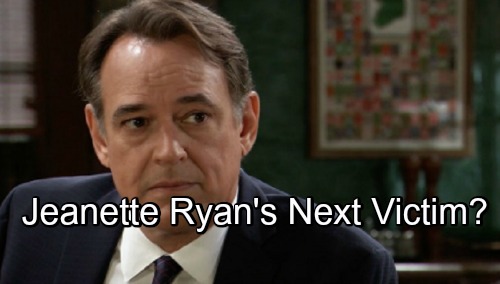 General Hospital spoilers tease that Ryan Chamberlain (Jon Lindstrom) just might be itching for another victim of opportunity. He had quite the couple of days ditching his sister-in-law Laura Collins (Genie Francis), going to all that torso-posing trouble trying to impress Ava Jerome (Maura West) and then breaking off their therapy and saying he couldn’t be objective enough to continue treating her. Might Ryan might be ready for a little stress relief in the form of a random kill?

So, what will he do? Cruise the docks or the bars of Port Charles, or look for a victim in General Hospital? He may not want to look in local bars or the hospital since his face is too well known there. However, the docks may afford him a good hunting ground if he’s far enough away from Port Charles proper.

Ryan’s perfect target would be a random woman, perhaps alone and in need of a friend. Preferably, she would be someone from out of town that Ryan doesn’t recognize so that no one could connect to him or any mutual friends.

When DA Margaux Dawson was proven the truth about her mother, Jeanette Marino (Ely Pouget), with the help of Sonny Corinthos (Maurice Benard) she was so upset she kicked her mom out of their family home. It had been long enough for Margaux to pass out drunk on the floor with no sign of Jeanette returning.

What if Jeanette, obviously upset as well, headed to Port Charles to scope out the bar where her husband’s remains were found underneath. Maybe she also went on a drunk like her daughter did and then went down to the docks to look at the water and the boats out in the harbor, and like Sonny does, reflect on her life and past mistakes.

Then Ryan, looking for fresh meat to hunt finds her. Maybe he approaches her as a friendly stranger and she’s just simply in the wrong place at the wrong time. If when Margaux and Sonny return to Port Charles, her mother has gone missing and then a body is found matching her description, that will only bring more grief into her life and more remorse for Sonny.

Could Jeanette turn out to be one of Ryan’s random kills. Stay tuned to General Hospital and keep checking General Hospital spoilers frequently to see if indeed, Jeanette Marino turns out to be Ryan Chamberlain’s next victim and the effects this has on Margaux and Sonny!