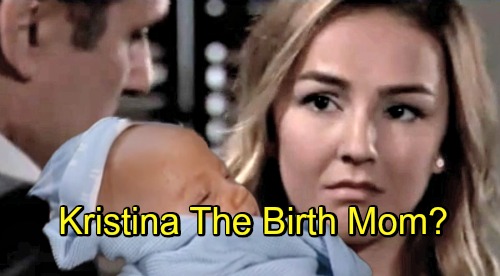 General Hospital (GH) spoilers tease that the birth mom of the original Wiley Cooper-Jones, who sadly suffered crib death, may be someone from Port Charles who has recently returned to town. Kristina Corinthos-Davis (Lexi Ainsworth) just showed up after several months’ absence, having suddenly moved to Oregon last fall with her professor/partner Parker Forsyth (Ashley Jones).

Ashley Jones recently returned to her role as Dr. Bridget Forrester on The Bold and the Beautiful for the Lope Wedding, so it’s unlikely she’ll reprise Parker on General Hospital at this time. This could imply Parker and Krissy have broken up.

Even though General Hospital spoilers have warned that the birth mom will come into the picture and want her baby back, nothing has been officially divulged as to who she might be. The timing of Kristina’s return and comforting half-brother Michael Corinthos (Chad Duell) over the perceived loss of his child with Nelle Benson (Chloe Lanier) and the call to Alexis Davis (Nancy Lee Grahan) during the surprise party at her home shortly afterwards could seem suspicious.

Kristina may still be holding some secrets other than feeling like she was drifting, and insisting Parker and she were “fine” as she told older sister Sam (Kelly Monaco). It’s even possible Kristina has been in town longer than she’s let on, and she just appeared now to comfort Michael. Could the birth mother of Lucas Jones (Ryan Carnes) and Brad Cooper’s (Parry Shen) original baby, Wiley, be Kristina?

Kristina and Parker could have planned a baby and Kristina could have used a donor and been artificially inseminated. Parker is closer to Alexis’ age so it would be more likely that if one of them was going to carry their baby, it would be Krissy.

Or, as long-time GH viewers would recall, Kristina hasn’t always had strictly same-sex relationships-she had relationships with men also, and a previous marriage. She could have become bored and had an affair with a man, or Parker could have cheated on her as well, causing a breakup.

If so, she could have decided to give her baby up after it was born. After seeing how broken Michael is over the loss of his child, she may have decided she wants her baby back. There is another hospital besides GH in Port Charles; she could have had the baby at Mercy Hospital, where Dr. Kim Nero (Tamara Braun) previously worked.

Imagine the soapy chaos and conflict the revelation of Kristina being the birth mother would bring into the already complicated situation! Kristina currently has no clue that her mom was involved in the Brucas baby adoption, and may not even know about it, and likewise Alexis is working with the birth mom’s attorney, on the condition that the birth mom remains anonymous.

That’s complication #1. Complication #2 of course is that the real baby is dead; other General Hospital spoilers say Dr. Kim Nero may discover that the dead baby isn’t Nelle’s, but before that discovery is revealed, the birth mom has decided she wants her baby back from Brad and Lucas.  Of course the baby they think they have isn’t the birth mom’s, it’s really Jonah Corinthos.

Complication #3: Julian Jerome (William DeVry) could be caught between Alexis and Lucas. Lucas is already very attached to the baby, and Julian has been able to have more of a relationship with Lucas because of the baby. Alexis of course will side with the birth mother once she knows it’s Kristina.

Complication #4: Sonny Corinthos (Maurice Benard) will be torn once the baby switch is revealed and the birth mother is revealed as Kristina… he will have the joy of knowing his adopted son Michael’s baby is alive, but the grief of knowing his natural daughter Kristina’s is not. Michael and Kristina will be experiencing the same mixed emotions right along with him.

So will this mysterious coincidence of the birth mother wanting her baby back right after Kristina Corinthos-Davis comes back to town and comforts Michael turn out to be not such a coincidence after all? Keep tuning into GH and checking General Hospital spoilers frequently to see what develops!