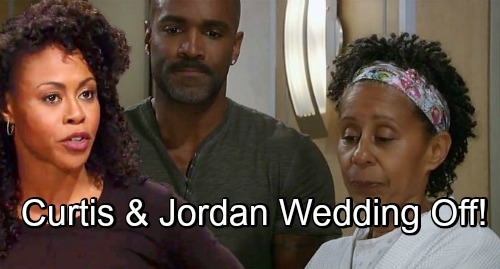 General Hospital (GH) spoilers tease that Curtis (Donnell Turner) and Jordan Ashford (Vinessa Antoine) may not make it down the aisle for their wedding ceremony – at least not the first time! In a recent episode, Curtis and Jordan had a tense family counseling session with Stella Henry (Vernee Watson). They spoke with Dr. Linda Massey (Chandra Wilson), who did her best to handle all the drama.

GH fans could see that Stella was on Jordan’s last nerve. Stella was equally enraged with the bride-to-be. Of course, poor Curtis was stuck in the middle of it all. He just wants some family peace, but that’s been tough to achieve ever since Stella hit town.

Considering the continued vitriol between Stella and Jordan, General Hospital writers may have Jordan throw in the towel for a while and possibly head off the canvas. Having Jordan make a brief exit could help with the transition between Antoine and her replacement, Briana Nicole Henry. Recasts always bring an adjustment period, so giving viewers some time between the two actresses could be beneficial.

Jordan could take a short vacay and return feeling like a brand-new woman. To fans, she will be! Then again, we know Ryan Chamberlain (Jon Lindstrom) will soon wreak havoc. He’s prone to violence, so we can’t rule out a facial injury and plastic surgery to explain Jordan’s different look. In that case, Jordan might postpone the wedding as she takes time to recover.

However, GH may just slide the recast in and let the audience deal with it. That wouldn’t be the end of the world. Jordan could still postpone her nuptials over all the tension with Stella. She may have second thoughts about signing on for a lifetime of conflict.

If possible, it’d be better to leave Jordan active in Port Charles anyway. With Ryan on the loose and out for blood, Jordan will be needed for some shocking investigations. Once that storyline winds down, maybe Jordan and Curtis could revisit the whole wedding idea.

Whether this is just a delay or a completely broken engagement, “Jurtis” could have a rocky road ahead. General Hospital spoilers state that some big twists are coming up in this romance, so stay tuned. We’ll give you updates as other GH news emerges. Stick with the ABC soap and don’t forget to check CDL often for the latest General Hospital spoilers, updates and news.