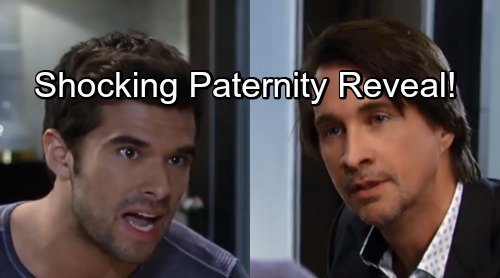 General Hospital (GH) spoilers tease some stunning revelations are ahead. GH fans have been baffled by Finn’s (Michael Easton) grudge against his half-brother, Chase (Josh Swickard). Ever since Chase showed up in town, he’s been making an effort to bond. No matter how hard he tries, Finn refuses to budge on connecting.

Chase seems like a great guy, so Finn’s attitude is a bit harsh. Nevertheless, he’s adamant that they should steer clear of each other. Why is Finn so angry and how will his explanation affect Chase? General Hospital spoilers say the mystery of Finn’s resentment will slowly unravel. A buried family secret could be the source of all the drama.

Fortunately, GH has given us several helpful hints. These clues could go a long way toward solving the puzzle. After Alexis (Nancy Lee Grahn) tricked Finn and Chase into meeting, they had an extremely tense conversation. Chase mentioned that their father moved on quickly after Finn’s mom died. He suspected that might have something to do with Finn’s continued rage.

Finn wouldn’t offer many details, but he insisted he had good reasons for shutting their dad out. He argued that letting Chase into his life would open the door to their dad, too. That’s something Finn just won’t tolerate. Since we know Finn’s father is the main problem, let’s consider what he might’ve done to provoke Finn’s wrath.

It’s possible that Finn was in love with a woman who fell for his father. In other words, Finn’s dad may have stolen his girlfriend and married her. Of course, Chase would have no idea since he wasn’t even born yet. In fact, that could be another major clue. It’s strange that General Hospital made their age difference so large. Chase suggested that being a generation apart was another bonding hurdle.

If Finn and his dad were sleeping with the same woman around the same time, that brings us to the potential twist. What if Finn is Chase’s biological father?! Both of them would likely be in the dark on this shocker. Perhaps their father kept the secret for his new wife’s sake and raised Chase as his own.

Before Finn and Chase wrapped up their last chat, Finn insisted that they’d never have a brotherly relationship. Could that be because GH will drop a daddy bomb? How would these two deal with the news? General Hospital spoilers reveal that some jaw-dropping info will indeed come out, so stay tuned to see what’s in store.

Do you think Finn could be Chase’s bio dad instead of his half-brother? We’ll give you updates as other GH details emerge. Stick with the ABC soap and don’t forget to check CDL often for the latest General Hospital spoilers, updates and news.