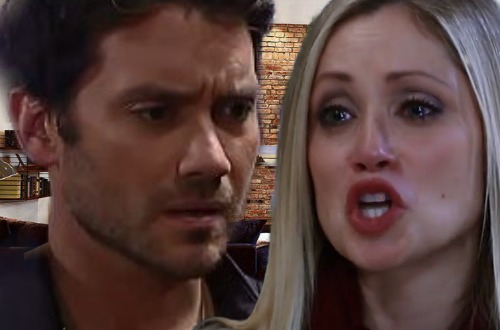 General Hospital (GH) spoilers tease that more trouble’s brewing for Dante (Dominic Zamprogna) and Lulu (Emme Rylan). They’ve faced plenty of arguments lately and there’s no sign of them die down. In fact, these fights could alter the course of their lives in ways they never expected.

You’ve probably heard the buzz about Dominic Zamprogna by now. Nothing’s been confirmed, but all signs point to Zamprogna’s departure. He’s sent several cryptic tweets, but there’s been no comment on his exit.

Zamprogna’s silence seems like a huge hint. General Hospital usually likes to shut down any bogus departure news right off the bat. If you don’t hear a peep for weeks, it’s usually true. Another one of Zamprogna’s latest tweets backs up the exit idea. He replied to a group of GH fans who sent him some praise, but he never acknowledged a crucial part of a message to him.

A viewer gushed about Zamprogna’s acting ability as well as his kind heart. She added, “If he is, indeed, leaving, I’ll miss him terribly, but wish him only success & happiness.” Her friends were in agreement, so a grateful Zamprogna suggested they were “too kind.”

That would’ve been the ideal moment to shut down departure talk, but Zamprogna passed it up. There’s surely a reason for that and it’s probably that he can’t. Plus, we’ve got General Hospital spoilers about the drama revving up in “Lante’s” marriage. Could that be a factor in Zamprogna’s exit story? It seems like a good possibility.

If GH kills Dante off, it’ll be devastating for Lulu. That’s especially true if they’re on bad terms at the time of his death. However, General Hospital could take another route by sending Dante out on some special mission. Whether it’s tied to police work or a loved one’s rescue, Dante could simply disappear.

Maybe viewers could see Dante being held hostage somewhere, which would leave the door open for a recast or Zamprogna’s return. Lulu would undoubtedly try to find her husband. Sonny (Maurice Benard) would try to track Dante down, too. However, he could disappear without a trace. They might be forced to give up on Dante eventually. That’d still force Lulu to feel guilt over their previous feuding.