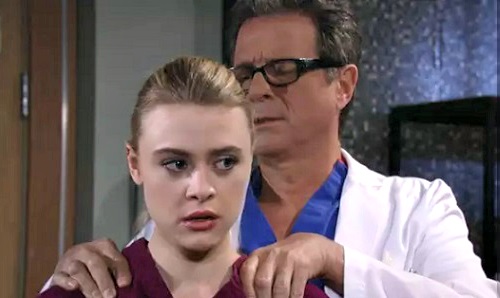 General Hospital (GH) spoilers tease that Dr. Bensch (James DePaiva) has some unpleasant surprises in store for Kiki (Hayley Erin). When he first arrived on the scene, viewers couldn’t quite wrap their heads around him. Some fans thought Dr. Bensch gave off a creepy vibe from the get-go. Others just thought he was just weird and a bit boring.

Regardless, there aren’t too many people out there who ever really loved the guy. General Hospital seemed unsure of what direction they wanted to take the character in. That may have hurt Dr. Bensch’s chances of landing as a viable love interest or even a just a beloved GH doc. Few viewers cared initially and now they hate Dr. Bensch for his disturbing moves on Kiki.

Dr. Bensch’s latest storyline pretty much guarantees that he’s on his way out. Monica (Patty McCormack) warned that Dr. Bensch would merely be suspended if Kiki’s accusations were proven. That line was likely included to highlight the lack of consequences for this real-world issue. However, this isn’t the real world. It’s soap land and everyone pays for their mistakes to some extent.

With that in mind, Dr. Bensch could be going down in a big way! A blind item was released a while back that offered an intriguing hint. Soap Opera Digest said one daytime drama was planning to kill off a character that never clicked with fans. You could easily put Dr. Bensch in that category. 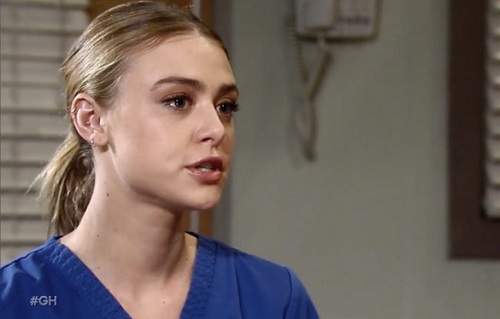 Dr. Bensch is getting more ruthless every day, so a deadly exit could be looming. While Kiki was filing a complaint, Dr. Bensch was busy telling Ava (Maura West) that she’d been distracted lately. He indicated that something or someone must be to blame. Dr. Bensch seems to know what went down between Griffin (Matt Cohen) and Kiki, so he probably saw them entering Griffin’s room that night.

Now Dr. Bensch is stirring the pot and setting Kiki up for a fall. On June 13, General Hospital spoilers say Kiki will face her fears and regrets. She may have to come clean about the Griffin hookup with the board or at least Ava. Later, Kiki will find herself in distress. Will Dr. Bensch manage to corner her alone again? Will he try to rape her and force drastic action?

It’s easy to imagine a scenario where Kiki kills Dr. Bensch in self-defense. If not, Griffin might discover the sexual assault in progress and do it for her. Griffin wouldn’t mean to cause Dr. Bensch’s death, but things can get out of hand in the heat of the moment. There’s also a chance that Ava will make the deadly move.

Franco (Roger Howarth) could even be involved here since he cares about Kiki and GH brought Liz (Rebecca Herbst) into the story. If some sort of showdown doesn’t finish Dr. Bensch off, Sonny (Maurice Benard) or Julian (William DeVry) might handle it. They seem like the least likely options, but they’re certainly powerful men who’d have a reason to take the creep out!

Whatever the case, General Hospital may not let Dr. Bensch survive in the end. He can’t stick around after this, so they might as well go for some shock value. We’ll give you updates as other GH news comes in. Stay tuned to the ABC soap and don’t forget to check CDL often for the latest General Hospital spoilers, updates and news.