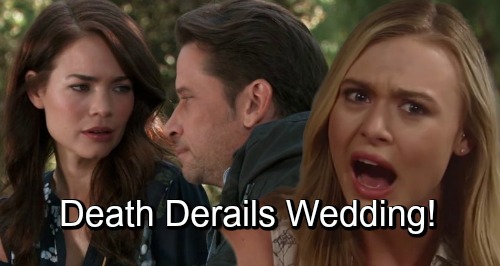 General Hospital (GH) spoilers tease that Franco (Roger Howarth) and Liz (Rebecca Herbst) wedding day is just around the corner. In all the talk about Curtis (Donnell Turner) and Jordan’s (Briana Nicole Henry) nuptials, it’s easy to forget about “Friz” and their own plans. However, GH will bring their marriage goal back to the forefront soon enough.

Liz and Franco’s last attempt to tie the knot didn’t work out. An earthquake derailed their ceremony, so they had to postpone. Of course, Franco also had to work through plenty of Jim Harvey (Jim Evigan) issues. That brought another crisis, but Franco and Liz have persevered. Their love is stronger than ever, so it’ll take more than that to tear them apart.

This couple will still face problems though. Liz and Franco will most likely work through them together, but it won’t be easy. Some shocking drama could threaten their next wedding and possibly force a second postponement.

Shelly Altman, one of GH’s co-head writers, discussed this possibility in a recent issue of Soap Opera Digest. She mentioned the November nuptials and suggested that “familial challenges that might force a change of plans.” It’s worth pointing out that Altman said “might” and not “will.” Nevertheless, soap writers tend to speak cryptically like that in mag interviews. Suggestions tend to turn into facts.

With that in mind, we should think about what could cause another “Friz” wedding roadblock. Since we know familial challenges are brewing, Aiden’s (Jason David) school trouble may be one of them. Unfortunately, there could be a far worse one – and it involves Kiki (Hayley Erin).

General Hospital spoilers say Kiki will likely be killed by Ryan (Jon Lindstrom) in the coming weeks. Franco thinks of Kiki like a daughter and Liz is close to her, too. They’ll both be ripped apart if Kiki is brutally murdered. That’d certainly be a solid reason to delay their nuptials.

Liz and Franco surely won’t feel like celebrating with a big party, so they may hold off. They might even just go for something smaller in a couple months. Since their wedding plans never seem to pan out, why not do a private ceremony with just Franco, Liz and her boys? All that should really matter is the love within this family.