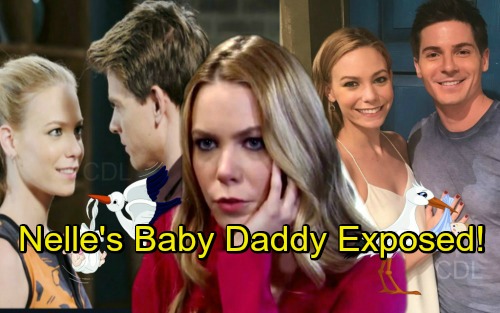 General Hospital (GH) spoilers tease that the Nelle (Chloe Lanier) drama isn’t over yet. After Lanier decided to leave the show, GH sent Nelle off to prison. However, Lanier promised that we haven’t seen the last of Nelle. She’s open to return stints, which is great since there are more shockers to come.

For starters, Michael (Chad Duell) needs to find out about the baby swap. General Hospital writers will undoubtedly take their time with that revelation, but you can bet it’s coming. Secrets like that don’t stay buried forever.

We also know that this switch storyline will come with several major twists. When you add the buzz that Michael may not be this kid’s real father, that presents an interesting question. If Michael isn’t the true “baby daddy,” who is? There’s one option that immediately comes to mind.

It’s possible that GH is gearing up for Dillon’s (Robert Palmer Watkins) comeback. Did Nelle and Dillon have a one-night stand off screen? Did Nelle manage to fake the paternity test and trick Michael into believing he was the dad? This would be the perfect way to spark Dillon’s return to Port Charles.

Dillon could decide he’s ready to step up and become a father. Then again, he might sign away his rights and let “Brucas” keep the baby. Lucas (Ryan Carnes) and Brad (Parry Shen) would certainly beg Dillon for the chance. Either way, it could give Dillon an intriguing story and put him at the center of the action again.

The timing would be great since Kiki’s (Hayley Erin) turmoil is only going to get worse. Dr. Bensch (James DePaiva) is out for revenge, so Kiki could use Dillon in her corner. She’s also single, so there’d be the potential for “Killon” reunion.

Since Nina’s (Michelle Stafford) got a long-lost daughter out there, many General Hospital fans think it could be Kiki. She’s going to be even more overwhelmed if that’s the case. If Kiki finds out that Ava (Maura West) isn’t really her mom, that’s going to turn her world upside down. Kiki’s angry with Ava right now, but it’s still be a life-changing blow.

In other words, Kiki’s going to need Dillon more than ever! These two deserve a real shot at happiness, so maybe GH will give them one. General Hospital spoilers say some surprises are brewing, so let’s hope both Nelle and Dillon reenter the picture for the chaos.

Do you think Dillon could be the father of Nelle’s baby? Would you like to see GH head in that direction? We’ll give you updates as other news comes in. Stick with the ABC soap and don’t forget to check CDL often for the latest General Hospital spoilers, updates and news.