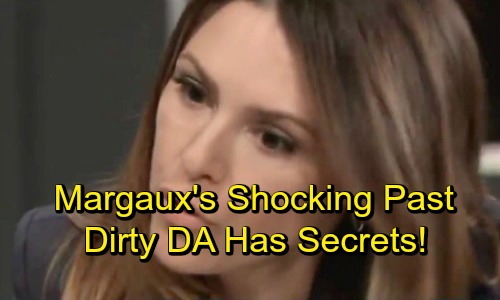 General Hospital spoilers tease that Jason Morgan, (Steve Burton) Sonny Corinthos (Maurice Benard) and Carly Corinthos (Laura Wright) may not have to dig up dirt on DA Margaux Dawson’s (Elizabeth Hendricks) father to get her to back down. They may be able to find dirt on Margaux herself.

It is true that Curtis Ashford (Donnell Turner) did a background check on Margaux at the behest of Drew Cain (Billy Miller) several months ago; it didn’t turn up much. But another General Hospital spoiler teases that Sam McCall (Kelly Monaco) will be surprised by Damian Spinelli (Bradford Anderson), so that means Spinelli may make another visit to Port Charles soon, and he can dig a lot deeper than Curtis could.

Spinelli may even find things about “Dastardly Dawson’s” past that shows the apple doesn’t fall far from the tree, the tree being her late father Vincent Marino!

Then there’s the scene several months ago when Dr. Kim Nero (Tamara Braun) and Margaux saw each other at the bar at Charlie’s Pub, and Kim felt like she had seen her or known her from somewhere previously, and Margaux denied knowing Kim. It’s possible that is because Kim saw Margaux on the news.

Could Margaux have been on the news not because of her prosecuting a big case, but because she herself may have been the defendant in the case? Or, as an aggressive assistant DA during her time in Oakland, California, she may have played dirty pool such as planting evidence to make sure an innocent defendant would lose a case.

If it were a high profile trial, that could have made the news and if the defendant fought back and proved Margaux planted evidence, she could have had sanctions placed against her prohibiting her from practicing law in California. It’s possible she could have had the records sealed or it may have been long ago enough that Curtis didn’t find anything about it.

Another possibility is that she was involved in a high profile, very ugly divorce that made the news! Something ugly had to have gone on for a marriage to only have lasted one year. Her ex could have been a wealthy older man, and Margaux glommed onto him only for his money.

If she was trying high-profile cases at the time Mr. Dawson divorced her and publicly exposed her as a gold digger, which could cause a scandal as well and possibly could have forced her out of California. Or maybe she continued to stalk her ex and ultimately made him disappear like her father, and she went on TV pleading as a young grieving wife to help her find her missing husband!

Any number of things could have caused Kim to remember seeing Margaux in newspapers or TV that Margaux wouldn’t want anyone in Port Charles to know about. Keep watching GH and checking out General Hospital spoilers on CDL to see what Spinelli might find on the dastardly DA.