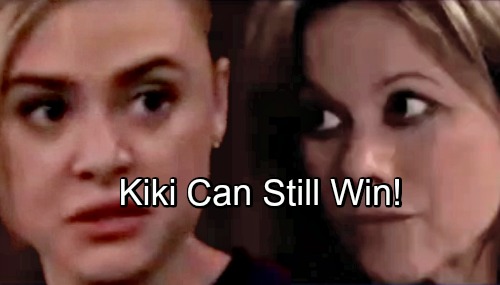 General Hospital spoilers tease that Kiki (Hayley Erin) will be a bundle of nerves as the jury in her sexual harassment case against Dr. Bensch (James DePaiva) deliberates toward its verdict. Kiki’s case will face a devastating setback when it’s revealed in open court that she had a one-night stand with Dr. Griffin Munro (Matt Cohen). Griffin will be forced to reveal the affair on the stand, much to Kiki’s horror.

Kiki had hoped that her fling with Griffin would remain a secret, but that just wasn’t meant to be. These types of sordid details often come out in sexual harassment cases, as the defendant portrays the alleged victim as promiscuous and claims that she “wanted” the alleged harassing behavior to take place.

But it’s now 2018, and most people (including the jurors in Kiki’s case) know that just because someone has sex with one person doesn’t mean that she wants to be sexually harassed by another. Will Griffin’s admission really be that much of a setback for Kiki’s case?

Dr. Bensch certainly will think that he’s won the entire case after the affair comes to light. He’ll likely gloat and think that the jury will believe that Kiki is a liar who can’t be trusted to tell the truth. After all, she stated under oath that she and Griffin were just friends, and that wasn’t true.

But the jury may not see it that way. They may see through Dr. Bensch’s tactics and decide that Kiki’s one night with Griffin really isn’t relevant to the sexual harassment allegations against Dr. Bensch. In fact, they might even hold it against Dr. Bensch that his lawyer brought up the matter in the first place.

At any rate, we can expect Alexis (Nancy Lee Grahn) to forge ahead with the trial and do her best to vigorously advocate for her client. Alexis won’t be happy that Kiki kept the affair from her, but she’s a professional and a great lawyer who will likely be able to pick up the pieces and deliver an effective closing statement for Kiki.

Of course, there’s another wrinkle to this whole story, and that’s that Ava (Maura West) heavily pressured Scott (Kin Shriner) to ask Griffin the pointed question about whether he’s had sexual relations with Kiki. Ava was hurt and, in the moment, wanted Kiki to suffer for the indiscretion. Kiki will have to deal with that drama eventually, but for now, her sole focus will likely be on the impending jury verdict.

Will the jury believe Kiki’s side of the case and return a verdict in her favor? Or will Kiki’s night with Griffin ultimately cost her the case? Stay tuned to the ABC soap and don’t forget to check CDL often for the latest General Hospital spoilers, updates, and news.