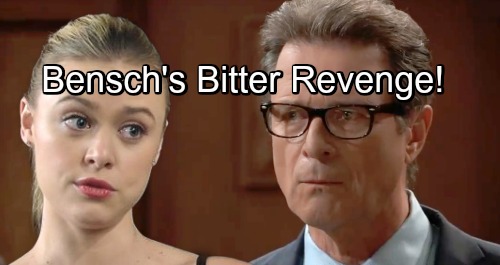 General Hospital (GH) spoilers tease that Dr. David Bensch (James DePaiva) could fight back in a big way. He’s not a man who gives up easily! Dr. Bensch was furious over the sexual harassment trial verdict, so he plans on appealing it. However, Alexis Davis (Nancy Lee Grahn) suggested it was unlikely there’d be a change in the ruling.

As a result, Dr. Bensch may do what he does best and play dirty. He could try to take Kiki Jerome (Hayley Erin) down using another strategy. Dr. Bensch just might go after Kiki’s allies as well. If he loses his career and reputation over this, that’d give him even more of a motive. What would he have to lose?

Of course, Dr. Bensch still has his job for now. The court ruling doesn’t affect GH’s staff decisions, so they may keep Bensch around – at least for a while. Dr. Bensch can’t keep stalking Kiki at General Hospital, but he could dig for even worse dirt. Alexis, Lulu Falconeri (Emme Rylan) and Francesca Cavallo (Celesta DeAstis) could all become targets, too.

Dr. Bensch will need ammo if he hopes to discredit Kiki and her supporters during the appeal process. He apparently hasn’t done enough homework to realize what’s at stake. The doc could easily get Julian Jerome (William deVry) and Sonny Corinthos (Maurice Benard) on his bad side. If Dr. Bensch pushes too hard, either one of them could take drastic action.

Bensch should really watch his step, especially if he decides to drag Ava Jerome (Maura West) through the mud along with everyone else. She’s furious with Kiki right now, but that doesn’t mean she approves of what Dr. Bensch did. Ava could set him up for a bogus rape charge if he’s not careful. No one would put something like that past Ava.

Julian and Franco Baldwin (Roger Howarth) weren’t into the idea of doing anything deadly, but they could change their minds depending on Dr. Bensch’s next move. Even if they don’t, Ava’s certainly capable of murder. She just might take matters into her own hands. General Hospital spoilers say Ava will continue to have major meltdowns, so you never know what she’s got up her sleeve.

Dr. Bensch might not find exactly what he’s looking for in his search for dirt. That could force him to get creative and manufacture some. The fact that Dr. Bensch briefly dated Alexis could also be an issue. He could contend that it was a conflict of interest and demand a new trial. With a less capable lawyer, Kiki might not come out on top again.

Still, the signs could point to something more sinister. If Dr. Bensch’s appeal fails and he ends up losing his GH position, how far will he go for revenge? Will it drive Dr. Bensch over the edge and bring danger for Kiki? We’ll give you updates as other news comes in. Stay tuned to the ABC soap and don’t forget to check CDL often for the latest General Hospital spoilers, updates and news.