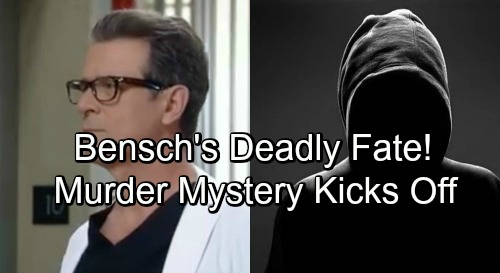 General Hospital (GH) spoilers tease a murder mystery may be looming and the victim could be the show’s biggest creep. Of course, we’re talking about dirty Dr. David Bensch (James DePaiva). He’s gaining enemies and constantly riling them up, so he may not make it out of this storyline alive.

If General Hospital writers indeed have a grim fate in mind, who will do the deed? There’s no shortage of suspects in Port Charles. Several potential murderers are emerging, so let’s consider who take Dr. Bensch’s life.

Naturally, the list has to include Franco Baldwin (Roger Howarth). He’s a former serial killer who thinks of Kiki Jerome (Hayley Erin) as a daughter, so he’s perfectly capable of going after the doc. Franco already roughed up Bensch in the GH locker room, but his rage could run deeper if the dirtbag gets off the hook.

Plus, Franco loathes predators like Dr. Bensch or in his own case, Jim Harvey (Greg Evigan). He suffered sexual abuse as a child, so he hates the thought of Dr. Bensch crossing the line with young nurses and med students. The last thing Franco wants is for Bensch to get away with his actions.

After Ava Jerome (Maura West) made some murder plot suggestions, Franco said they should just see how the lawsuit goes first. If Kiki fails to secure a victory, Franco might opt for a fatal solution. Then again, Ava could just as easily make a lethal move. She brought up the idea of killing Bensch and she’s got a murderous history to back it up.

General Hospital viewers will recall that Ava killed Connie Falconeri aka Kate Howard (Kelly Sullivan). She was desperate to keep Julian Jerome’s true identity under wraps, so murder seemed like the best option. That proves Ava will do just about anything to protect her family.

Julian could be another suspect. He hinted that Dr. Bensch should be split in pieces for what he did to Kiki. When you add Julian’s violent past in the mob, he could kill Dr. Bensch and never lose a second of sleep over it.

Next, there’s Dr. Griffin Munro (Matt Cohen). He tends to be a lover instead of a fighter, but everyone has a limit. Griffin may be a longshot suspect, but that’d just add to the shock of the big reveal. Let’s say Dr. Bensch wins the court case and decides he can get away with sexually assaulting Kiki. If Griffin walked in on the rape, he could fight Bensch to the death!

Even Kiki herself could do the deed. Nurse Francesca (Celesta DeAstis) might be another plausible option. Their anger has been building, so you never know when they might snap. If GH wants to keep them as innocent victims, maybe one woman could kill Dr. Bensch in self-defense or in an effort to defend the other.

Regardless, General Hospital spoilers say Dr. Bensch will suffer for what he’s done. Will his punishment come outside the courtroom? Will someone kill the doc and set up an intriguing murder mystery? We’ll give you updates as other GH news comes in. Stick with the ABC soap and don’t forget to check CDL often for the latest General Hospital spoilers, updates and news.