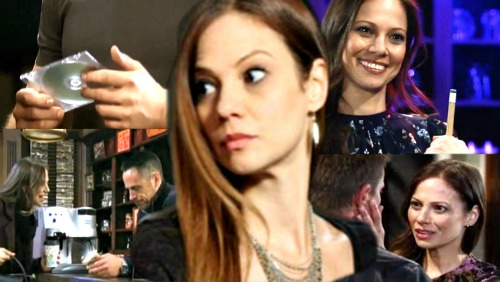 General Hospital (GH) spoilers tease that Dr. Kim Nero (Tamara Braun) seems to be a part of the growing number of dangerous and unethical doctors arriving in Port Charles and in GH in particular. From the very second she appeared at the Corinthos’ mansion she stood with confidence, showing no fear asking Sonny Corinthos (Maurice Benard) about his questionable mob business. If Kim Nero was a straight-laced doctor, she would have no need to know the shadier side of the town she lived in right?

Viewers of the ABC soap opera and particularly Tamara Braun, know she is a powerhouse actress and you can bet she is up to something pretty dark and sinister when it comes to Drew, Jason and all their loved ones! GH buzz is that this has nothing to do with the fact that she has a son with Drew – Ava Jerome (Maura West) has children, and that hasn’t stopped her from doing anything wretched!

GH fans noticed how Drew has been in Port Charles for years before Kim arrived, but the second Jason Morgan (Steve Burton) jumped through the skylight, his cover was blown and she made her first appearance. Before all this she was running her own clinic and was way too busy to ever meet anyone or spend any time with her son. Initially, that might have seemed odd – but not if you think about it for a moment.

Dr. Kim Nero only knew Drew with his original Jason face, right? She would have believed Drew still had SB’s face, and even if she was involved in the brain mapping scheme, in any way; there is no way she would have known that Jason survived nor would she have know that Drew had escaped and required facial reconstructive surgery after Ava Jerome hit him with her car a few years prior.

General Hospital spoilers tease that the CD Oscar Nero (Garren Stitt) gave his father, Drew, could be the key to this entire mess. Drew says he has listened to it, but it has been suggested on multiple occasions that there could be an underlying message within the music that has an as yet unknown purpose.

Do you believe Kim is far more involved than she is letting on when it comes to the brain mapping between Jason and Drew – and why is she suddenly so interested in Jason Morgan? What could Kim possibly have planned for Jason and Drew now?

GH fans notice Kim has been spending an awful lot of time with the lowlifes of the town. She has been thoroughly enjoying time with mobster, Julian Jerome (William deVry) and now flirting and playing pool with Jason, a mob enforcer.

Is Kim trying to align herself with powerful and dangerous people like Jason and Julian to deal with enemies from the past? Now that Dr. Andre Maddox (Anthony Montgomery) has been caught and Kim’s role could be exposed next she might be concerned. Especially since the ornament with the flash drive is still missing and it’s contents could reveal a whole lot about Drew’s past that Kim can’t afford to have exposed.

Be sure to tune into ABC’s General Hospital (GH) to catch up on everything happening in Port Charles right now, especially where Dr. Kim Nero is concerned. Check CDL General Hospital spoilers often for updates, news, and spoilers!