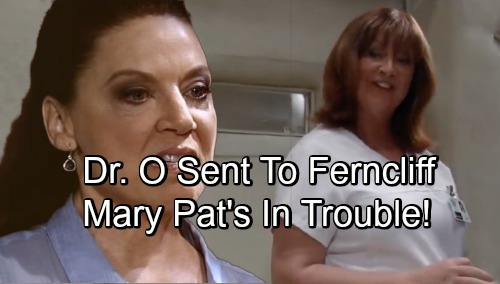 General Hospital spoilers tease that Liesl Obrecht (Kathleen Gati) will be thought to be criminally insane and will spend a stint in Ferncliff, at least for evaluation if not as part of her sentencing. Nurse Mary Pat (Patricia Bethune) may very well meet her match in Liesl, or maybe even be outmatched!

General Hospital viewers will remember Liesl’s resume over the past few years; she is still a doctor who worked at a clinic in Switzerland where Duke Lavery (Ian Buchanan) had been held for years, and at Crichton-Clarke where niece Nina Cassadine (Michelle Stafford) spent twenty-something years in a coma. Drew Cain (Billy Miller) also spent time in both places for a period of time when he was thought to be Jason Morgan (Steve Burton).

General Hospital spoilers wouldn’t put it past Liesl Obrecht to not only outmatch Mary Pat, but try to literally take over the facility. Like Ferncliff, the Swiss clinic and Crichton-Clarke both provided experimental treatments, some quite bizarre. Liesl and Dr. Lasaris (Casey Biggs) may even know each other from having worked at some of the same places.

Mary Pat will likely NOT be able to overpower and control Liesl like she has Carly Corinthos (Laura Wright), even with Rupert’s (Patrick Cox) help. After all, Liesl apparently hoisted an unconscious Peter August (Wes Ramsey) up and into a laundry cart, into her car, into the cabin, and up onto the bed where she tied him up.

That is one strong woman, unless she had an accomplice that GH writers have not divulged or written into the scripts yet.

It would be quite entertaining to see Liesl and Mary Pat get into an argument and quite possibly an altercation. One can only imagine Liesl expressing her opinions of Mary Pat to Mary Pat! Words such as “trottel” (moron), “inkompetentes Mädchen” (incompetent wench), “dummkopf” (idiot), and verrücktes Bimbo (crazy bimbo) come to mind!

Then Liesl would proceed to show Mary Pat how controlling patients is REALLY done. Of course this would come AFTER demonstrating this to Mary Pat on Mary Pat. Liesl in Ferncliff may even unknowingly be doing Carly a favor, since she’ll be keeping Mary Pat, Rupert, and Dr. Lasaris too busy to pay much attention to Carly.

Wild and entertaining times may be ahead at Ferncliff if Liesl is sent there. Stay tuned to the ABC soap and don’t forget to check CDL often for the latest General Hospital spoilers, updates and news.