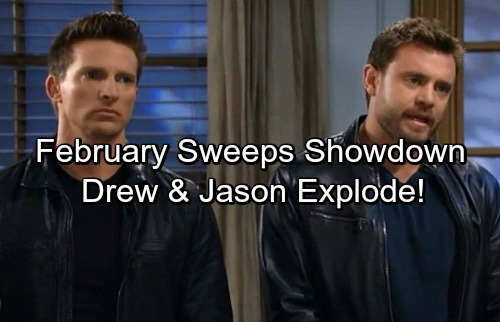 General Hospital (GH) spoilers tease that Peter (Wes Ramsey) will share some stunning news with Drew (Billy Miller) and Sam (Kelly Monaco). After Peter fills them in on all the Faison (Anders Hove) chaos, Drew will be appalled. He’ll wonder why Jason (Steve Burton) and Sonny (Maurice Benard) left him out of the loop.

To be fair, Jason did try to give his brother the heads-up. Drew was just too busy thinking about his wedding and honeymoon. However, Drew will feel like he deserved some updates along the way. He’ll believe he should’ve been notified about the details of their plan.

General Hospital spoilers say Drew will track Jason down for a confrontation. He’ll believe he’s been treated like an outsider. When Drew learns Anna (Finola Hughes) was also involved, he’ll be even more upset. Drew will contend that they were letting everyone in on this except him.

GH fans know Drew and Sonny have had some issues ever since Jason returned. They sort of made peace, but they aren’t exactly friends anymore. Drew may argue that Sonny only cares about his pet now. He’s really struggling to find a place where he belongs.

Drew can’t remember his past and his life as Jason is gone, too. That’s exactly why he’ll be distraught over the exclusion. Faison robbed him of his identity, so Drew will be furious that he wasn’t part of the takedown plot.

General Hospital spoilers state that Drew will blast Jason and question his choices. Jason usually takes whatever people dish out, but he may push back this time. Perhaps Jason is finally going to snap! He deserves the chance to vent a bit and Drew does as well. This is the perfect opportunity to let all their issues explode and get everything out in the open.

Naturally, Sam will be a major source of contention here. Deep down, Jason must resent his brother for stealing the love of his life. Drew isn’t Jason’s biggest fan either. Despite his new marriage to Sam, Drew must still view Jason as a threat to his romance.

Jason and Drew will get down to the nitty-gritty of their problems, so stay tuned. We’ll keep you posted as other GH info emerges. Stick with the ABC soap and don’t forget to check CDL often for the latest General Hospital spoilers, updates and news.