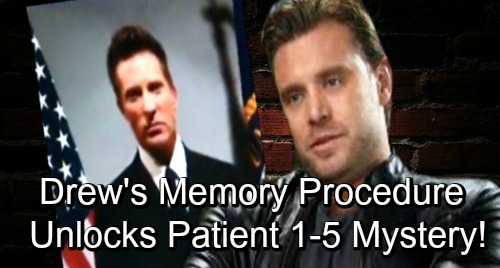 General Hospital (GH) spoilers tease that Drew (Billy Miller) may have a dangerous change of heart. During a chat with Kim (Tamara Braun), Drew admitted he felt like a hypocrite. He’s pushing Oscar (Garren Stitt) to sign up for a risky procedure when he’s not willing to do the same.

Kim learned Drew has a chance to get his memories back after all, so she warned against it. Going through with this could mean losing the new memories he’s made in Port Charles. It could reset him back to Drew before the memory transfer took place. Drew assured Kim he wasn’t going to do it, but is that a promise he’ll keep? There’s a good chance Drew will end up changing his mind eventually.

Oscar already lashed out at Drew and brought up this hypocrite accusations. Perhaps Drew will decide to prove Oscar wrong. He might hope he can set an example and show Oscar that sometimes risks are worth it.

Of course, the situation’s a bit different for Oscar. His procedure is his last shot at survival, so it’s absolutely necessary. Drew could keep living his life normally without fixing the memory situation. Still, this father’s love could drive him to desperation. As things grow increasingly dire for Oscar, will Drew seek a deal? It might help Oscar to know that he’s not going through something traumatic alone.

General Hospital’s leaving drama on the table if they don’t give Drew his memories back. They’ve dragged this on long enough. There’s no need for Drew to be another version of Jason (Steve Burton) when he can be himself. GH fans are eager to learn more about Drew’s past and whatever secrets he might be keeping.

This conversation could be a step in the right direction. Drew’s refusal certainly doesn’t mean anything. Characters shift their opinions frequently on soaps, so it’s a no-brainer for Drew to take another route later.

If Drew indeed goes through with this procedure, he might have some brief memory gaps. However, there’s probably no way GH would let him forget everything permanently. It’d just create some good angst for Drew and his loved ones until he ultimately remembered.

The real story here is what Drew might learn. He could easily recall details that led up to his memory procedure, including info about Patients 1-5. General Hospital left a loose end dangling, so that’ll likely be revisited down the road. Is GH finally on the verge of some shockers?

The show just might use this to bring some familiar faces back on canvas and shake things up! We’ll give you updates as other news comes in. Stay tuned to the ABC soap and don’t forget to check CDL often for the latest General Hospital spoilers, updates and news.