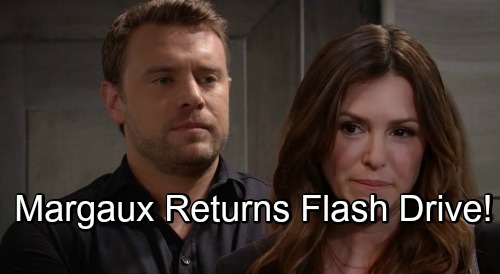 General Hospital (GH) spoilers tease that Drew (Billy Miller) will be shocked by Margaux’s (Elizabeth Hendrickson) next move. GH fans know Margaux got her hands on the flash drive and has been trying to use Drew’s memories as leverage. She held out hope that Drew would break and help her take down Sonny (Maurice Benard), but there was a flaw in her plan.

The memory reversal procedure comes with plenty of risks, including the possibility that Drew will forget the memories he’s made in Port Charles. There’s even a chance Drew could lose all brain function. This is all highly experimental, so Drew has made it clear that he has no intention of taking a gamble. As a result, Drew didn’t nibble at Margaux’s flash drive bait.

However, Margaux’s starting to see that Sonny isn’t the big, bad wolf she made him out to be. Sonny’s done some horrible things in his lifetime, but he’s got a heart, too. Margaux’s been trying to make sense of that lately. She’s also trying to let go of her grudge and make peace with the past, so her upcoming choice will tie in with that.

General Hospital spoilers say Margaux will decide to hand over the flash drive – no strings attached. She’ll give it to Drew and promise she doesn’t want anything in return. Even if Drew skips the procedure, he needs to do it because it’s his decision and not because there are no other options.

Margaux will undoubtedly offer Drew an apology as well. She let her vengeful get in the way of doing what was right. Margaux went against the law she swore to uphold, so she’ll be truly sorry for her actions. She may hope Drew can forgive her and maybe give friendship another shot one day.

Drew’s a kind and understanding guy, so he’ll probably reach a place of forgiveness in time. Perhaps GH will throw these two in a love story at some point. Margaux seems poised to have an affair with Sonny first, but that can’t last forever. General Hospital viewers know Carly (Laura Wright) and Sonny always end up back together eventually.

Of course, Drew will reevaluate his circumstances thanks to this flash drive. Once he actually has the opportunity to remember his old life, can he really pass it up? Drew might be inspired to take a risk like ailing Oscar (Garren Stitt). If Drew wants closure on his missing years, this is the only true path to it.