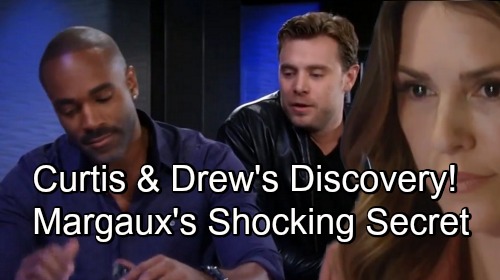 General Hospital (GH) spoilers tease that Jason’s (Steve Burton) warning will linger in Drew’s (Billy Miller) mind. He doesn’t hate Jason quite as much as he used to, but these brothers still have a long way to go. As a result, Drew will be reluctant to buy Jason’s claims.

After Margaux (Elizabeth Hendrickson) let Jason off the hook for his Ferncliff crimes, she deliberately brought up Drew’s name. Jason could tell Margaux had an agenda, so he decided to clue Drew in. Considering everything that’s happened between them, it was an especially nice gesture.

Drew didn’t seem to believe Jason’s view of the situation, but he’ll become more convinced as time goes on. Margaux is circling Drew like a vulture, so something’s obviously up. It’s not just because he’s handsome and single! GH fans know Margaux has the flash drive, but that’s only part of the story. She’s bound to be keeping a few secrets from her past.

Regardless of what else Margaux’s hiding, Drew’s suspicions will grow. General Hospital spoilers say they’ll have a few more encounters around town. Margaux always manages to pop up wherever Drew is. Soapy coincidences are common, but that may not be what’s happening this time around. It appears Margaux’s following or at least trying to predict when and where Drew will be.

On a new GH episode August 17, Drew will ponder some bizarre twists of fate. He’ll begin to see a pattern with Margaux and wonder if Jason could be right. After mulling it over, Drew will determine that has to know the truth. He’ll confront Margaux on August 20 and start grilling her about her intentions.

Of course, Drew may choose to be subtle about it. If he’s wrong, he won’t want to blow his shot with a lovely lady who’s interested. Drew was crushed after things fell apart with Sam (Kelly Monaco), so Margaux’s attention has undoubtedly been good for him. They usually get some flirty banter going whenever they meet up.

Margaux may even play up that angle and work to hide the real story. She doesn’t seem ready to reveal her flash drive discovery just yet. Margaux might argue that she’s trying to wear Drew down on the dating idea. Drew could accept that initially, but you can bet that his suspicions will continue to bug him.

On August 21, Drew will open up to Curtis (Donnell Turner). Could his buddy dig around a little and find out Margaux’s secrets? General Hospital spoilers say Margaux’s agenda will have to be exposed one way or another! We’ll give you updates as other GH news comes in. Stay tuned to the ABC soap and don’t forget to check CDL often for the latest General Hospital spoilers, updates and news.