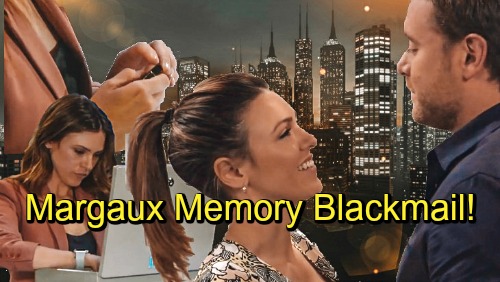 General Hospital (GH) spoilers tease that Margaux (Elizabeth Hendrickson) will get in touch with Drew (Billy Miller). She’ll want to talk about her priority at the moment, which is avenging her father’s death. After bringing Drew up to speed on the case, Margaux will seek his help. She’ll feel like Drew’s her best shot at putting Sonny (Maurice Benard) away for Vincent Marino’s murder.

Drew may point out that he doesn’t know anything about the crime, which happened decades ago. Sonny was just starting out in the business, so this stuff was buried deep. Jason (Steve Burton) didn’t even know about it, so it’s not like Drew would know anything either. They have the same set of memories.

However, Margaux will be convinced that there must be something she can use. Maybe she’ll think Drew at least has a memory that could put her on the right track. Even if Margaux can’t take Sonny down for this particular crime, Drew could help her lock him up for another one. He’s got plenty of dirt hidden away in that mind of his.

Of course, Drew will be reluctant to turn on his former boss. When everyone thought he was Jason, Drew was quite close to Sonny. He can remember the bond they shared and times when Sonny came through for him. Drew won’t want to dismiss all that, especially since the thing that’s tripping Sonny up happened so long ago.

General Hospital spoilers say Drew will tell Margaux that he’s sorry, but she’s on her own. Margaux will realize she’ll have to use her last resort soon. That’s where the flash drive will come in. Margaux will mull it over a bit longer, but she’ll eventually drop a GH bomb on Drew. She’ll make it clear that she can give him his Drew memories back.

In exchange, Margaux will want that Sonny takedown help she’s seeking. Drew would love to recapture his past and find out who he really is. Nevertheless, going after Sonny like this would be a huge deal. Since Jason’s so loyal to Sonny, this could destroy what’s left of Sam’s (Kelly Monaco) relationship with Drew.

Plus, Drew would be hurting Carly (Laura Wright), Michael (Chad Duell), Josslyn (Eden McCoy), Kristina (Lexi Ainsworth), Avery (Ava and Grace Scarola) and more. Would he truly be willing to do that? General Hospital spoilers say Drew will have to make some tough choices in the coming weeks!

Are you anxious to see what’s next in this storyline? We’ll give you updates as other GH news comes in. Stay tuned to the ABC soap and don’t forget to check CDL often for the latest General Hospital spoilers, updates and news.