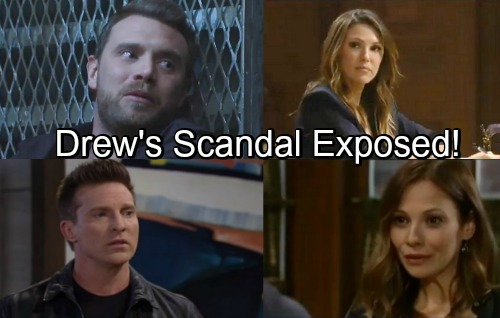 General Hospital (GH) spoilers tease that some jaw-dropping secrets will be revealed this summer. Naturally, some of them will involve Drew’s (Billy Miller) past. He’ll indeed get his memories back eventually, but that’ll bring a new set of complications. Drew’s about to find out that you should be careful what you wish for!

GH will finally fill Drew in on his history, which will bring pros and cons. On the bright side, Drew will at least have a better understanding of who he is. He can be his own man and distance himself from Jason’s (Steve Burton) character. That should give Drew some peace of mind as he looks to the future.

There’ll surely be some positive memories in the mix, so that should be nice for Drew as well. Unfortunately, Drew can’t escape the sorrow that comes with the negative memories. You can’t have the good without the bad, so Drew will just have to accept them both. He’ll remember some things he’d rather not know, but that’s just part of this process.

General Hospital spoilers say there’s one secret that’s particularly juicy. Drew can’t recall something that he desperately needs to know. It sounds like this may also fall under the category of painful, but it’s still a crucial fact that could change everything for Drew. Pain or no pain, Drew clearly has to remember and act on what he finds out.

What info could be waiting for Drew to uncover? There are a few options to consider. One might involve Kim’s (Tamara Braun) shadiness. She claims she wants to stop Drew’s memory mission for Oscar’s (Garren Stitt) sake, but there could be more to the story.

Kim may have misled Drew about the nature of their relationship. She might’ve fallen for him while working for Faison (Anders Hove) or some other GH baddie. Then again, General Hospital spoilers say Elizabeth Hendrickson (Margaux) has already taped scenes with Steve Burton. She’ll ultimately tape some with Billy Miller as well. Margaux may mistake Jason for Drew if they have a past together.

An old marriage would definitely be something that Drew needed to know about. Of course, this big secret could also be about Drew himself. What if he agreed to undergo the memory procedure and take Jason’s place? Did Drew turn to the dark side in the end?

There’s so much to explore in this shocking storyline, so General Hospital had better get busy! We’ll give you updates as other GH news comes in. Stay tuned to the ABC soap and don’t forget to check CDL often for the latest General Hospital spoilers, updates and news.