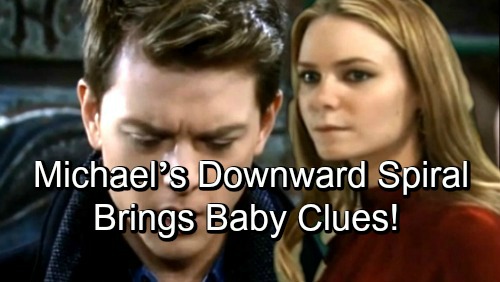 General Hospital (GH) spoilers tease that Michael (Chad Duell) will decide to drown his sorrows. We saw him struggle on screen after Jonah’s “death,” but GH hasn’t offered many scenes of his grief lately. Michael’s been busy with Morgan’s (Bryan Craig) memorial and Nelle’s (Chloe Lanier) courthouse drama.

However, that doesn’t mean Michael’s moved on. Once his distractions die down, he’ll fall right back into that pit of despair. Michael wasn’t thrilled about Nelle’s pregnancy at first, but he quickly sucked it up and decided to be a good father. By the time Nelle was ready to give birth, Michael was legitimately excited about being a dad.

Losing this baby was a brutal blow, so Michael just doesn’t know what to do with himself. Although he hates Nelle now, her exit from his life has brought issues, too. Michael spent plenty of time plotting against Nelle and preparing for Jonah’s future. He was all set to shove Nelle out of the picture and raise the kid on his own. Since Michael’s plan crumbled, he’s feeling lost and alone.

GH spoilers say Michael’s pain will rev up again by the end of the month. Sonny (Maurice Benard) will sense that his son’s having a rough time, so he’ll want to help. When they meet up to throw back a drink or two, Sonny will offer some support. He’s got problems of his own right now, but that doesn’t mean he can’t put them on pause. Sonny always wants to be there for his family.

Michael will certainly appreciate Sonny’s comfort and advice, but it seems like nothing can help him right now. People can recite platitudes and promise things will get better all they want. None of that can take away the sting of losing a child. Michael’s still got some agony to work though, but he may not handle it in a healthy way.

After sharing drinks with Sonny on October 29, Michael will end up in denial on October 30. In fact, he’ll be drowning in it! Does that mean Michael will hit the bottle a bit too hard? Could this set up some type of Halloween bombshell on October 31?

It’s possible Michael will find himself in a drunken stupor. He might dream that Jonah’s still alive or have some kind of premonition thanks to Nelle’s comments. General Hospital spoilers say Michael’s on a path to the truth, but he’s bound to take some detours. Still, this could be a crucial step toward uncovering the baby swap.

Michael will find out “Wiley” is his son eventually, so don’t miss his next clues. We’ll give you updates as other General Hospital news comes in. Stay tuned to ABC’s GH and don’t forget to check CDL often for the latest General Hospital spoilers, updates and news.