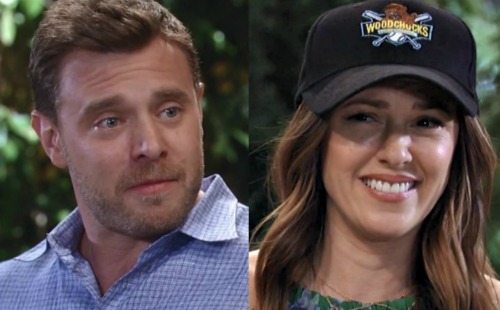 General Hospital (GH) spoilers hint that big things are ahead for Margaux (Elizabeth Hendrickson). GH fans finally got to see a softer side of her thanks to the mustard incident. She accidentally squirted her favorite condiment all over Drew’s (Billy Miller) back, so that was certainly a memorable “meet cute.”

Margaux and Drew have another encounter coming up soon. They’re going to be in each other’s orbit for a while, so we should probably get ready for some romance. In a recent Twitter chat, Elizabeth Hendrickson opened up about working with Billy Miller and weighed in on Margaux’s future.

Since Hendrickson and Miller used to be paired up on The Young and the Restless, it’s good to see them back on screen together. Hendrickson admitted she’s “SUPER EXCITED” to be sharing scenes with Miller again. “I always loved working with Billy Miller, feels like old times but also feels brand new since our characters are so different form our previous roles,” Hendrickson said.

Hendrickson revealed that she’s been shooting plenty of material with Miller, so it seems likely that Drew and Margaux will make a love connection. However, Hendrickson is open to other possibilities. She said, “Drew sounds fun but honestly there are so many talented actors on this show…the world is her oyster!!!”

Someone even suggested a hookup for Margaux and Sonny (Maurice Benard). Does Sonny need another one-night stand and surprise kid? Hendrickson loves working with Benard, so she wouldn’t balk at the idea. She teased, “Who wouldn’t (want to) have a baby with Sonny!????”

General Hospital viewers were also curious about Margaux’s background. Does she have secret ties to anyone in Port Charles? Hendrickson said, “As of now Margaux is new to town…but you never know there may be some connection that has not been revealed yet.” That definitely happened with Chase (Josh Swickard)! His ties to Finn (Michael Easton) and Nelle (Chloe Lanier) served as shockers later.

GH watchers won’t know a ton about Margaux yet, but Hendrickson promised that will change soon enough. She’s been learning more about her character in the scripts, so fans will get the same treat when those episodes air. “I hope you will all see more about who she really is at her core in the next few weeks,” Hendrickson said.