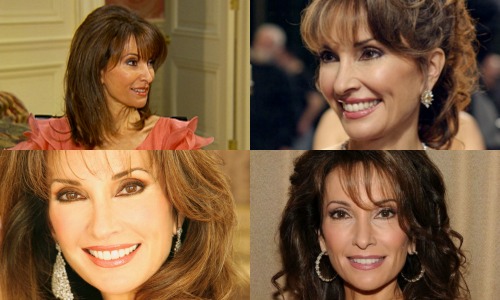 General Hospital (GH) spoilers tease that All My Children’s Erica Kane (Susan Lucci) may be on her way to Port Charles! On May 8, Maxie Jones West (Kirsten Storms) was heard having a loud argument over the phone at Crimson. She told the person on the other end that the terms were non-negotiable. When Maxie faced pushback, she shouted that she’s not afraid of Erica Kane.

Later, Maxie popped in on her boss Nina Cassadine (Michelle Stafford) and asked if there’d been any calls from Erica. What if Crimson offered Erica a modeling gig for a new story? If the focus was fashion for “older women,” an angry Erica might’ve demanded another title for the feature.

There’s also a chance that Erica has her eye on Crimson as a business opportunity. Does she want to buy it and run it herself? Erica was mentioned several times, so that could be a huge clue about her impending arrival. If they’re going to bring the famous Erica Kane to GH, you can bet she’ll cause major drama.

General Hospital is the only ABC soap left, but that doesn’t mean All My Children favorites have been forgotten. Frank Valentini, GH’s executive producer, has said he’d like to bring in characters from ABC’s canceled daytime dramas. We’ve already seen Nora Buchanan (Hilary B. Smith) from One Life to Live. If Erica Kane appears for a short arc or even as a regular, it wouldn’t be surprising.

On All My Children, Erica was involved with several fashion-related companies over the years. It’d make sense for Erica to attempt a hostile takeover of Crimson. In AMC’s network finale, there was a cliffhanger that left viewers wondering if Erica lived or died. A GH episode eventually cleared that up when Kate Howard (Kelly Sullivan) mentioned offering a job to Erica.

Of course, we also know Erica’s alive and kicking thanks to the latest Maxie drama. If you were a fan of All My Children when it aired, you’ll recall that Erica’s a force to be reckoned with. Even if you didn’t watch her back then, you can probably guess that Erica would stir up Port Charles trouble.

Chaos would ensue if Maxie was forced to work closely with Erica. GH has already set them up for a feud, so keep your fingers crossed for an Erica Kane stint. General Hospital spoilers say some hot drama’s looming! We’ll give you updates as other news comes in. Stick with the ABC soap and don’t forget to check CDL often for the latest General Hospital spoilers, updates and news.