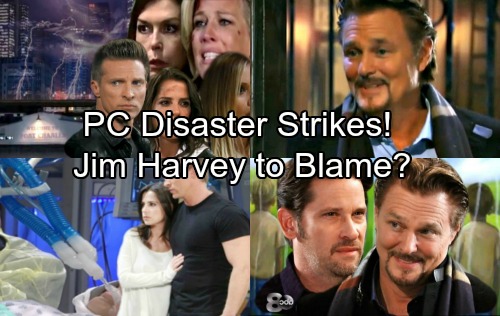 General Hospital (GH) spoilers tease that Jim Harvey (Greg Evigan) will continue to make trouble in Port Charles. GH fans are often divided on the stories they want featured or the couples they’re rooting for. However, we all agree on one thing: Jim is a real snake! Whether you’re enjoying his sleazy streak or you want him gone ASAP, there’s no denying that he’s a shady character.

Jim’s certainly revving up the pressure for people in the Charles Street district. It appears Jim may cross the line soon enough. General Hospital spoilers say an act of God will strike PC shortly. That points to a natural disaster of some sort, but what if there’s more to the story?

Jim’s pretty crafty, so he could try to make this disaster look like something unavoidable. He might set it up so that everything seems beyond anyone’s control. Nevertheless, it’s tough to buy this as a total coincidence. Some suspicions could emerge and they may suggest this is something besides a twist of fate.

Ava’s (Maura West) gallery will be at risk right around the time of Franco (Roger Howarth) and Liz’s (Rebecca Herbst) reception. General Hospital spoilers hint at destruction for Julian’s (William deVry) pub and Molly’s (Haley Pullos) apartment building as well. Things are really about to heat up!

Jim would definitely have a motive to cause additional drama here. He could take action to pave the way for his development and get back at a few enemies in the process. Of course, it’s also possible this so-called act of God will somewhat inadvertent. Perhaps shoddy gas lines or some other previous sabotage could lead to this disaster.

General Hospital viewers will recall that a gas leak forced Molly and TJ (Tequan Richmond) out of their apartment at one point. They found no evidence of an actual problem, so they figured the landlord was lying. What if the threat was real? An explosion could be brewing thanks to issues that Jim potentially instigated.

Jim’s plan may pay off in a way he didn’t expect. He’s been trying to drive everyone out of the area, but he may not have intended to take his scheme this far. Then again, no one would put it past him!

Regardless, chaos is brewing on the ABC soap. We’ll give you updates as other GH news comes in. Stay tuned and don’t forget to check CDL often for the latest General Hospital spoilers, updates and news.